It’s been more than ten years since I’ve been backpacking.

That realization was shocking to someone who hikes and camps more often than most. It had been ten years since I’d fired up that backpacking stove, used a water purifier in a creek, or enjoyed waking up on the side of a mountain without a soul around for miles. But I’m getting a bit ahead of myself. My trip to Newlin Creek was one of the best ways I could have imagined enjoying the 70+ sunny weather, and I highly recommend the trail if you’ve got an inkling to explore. 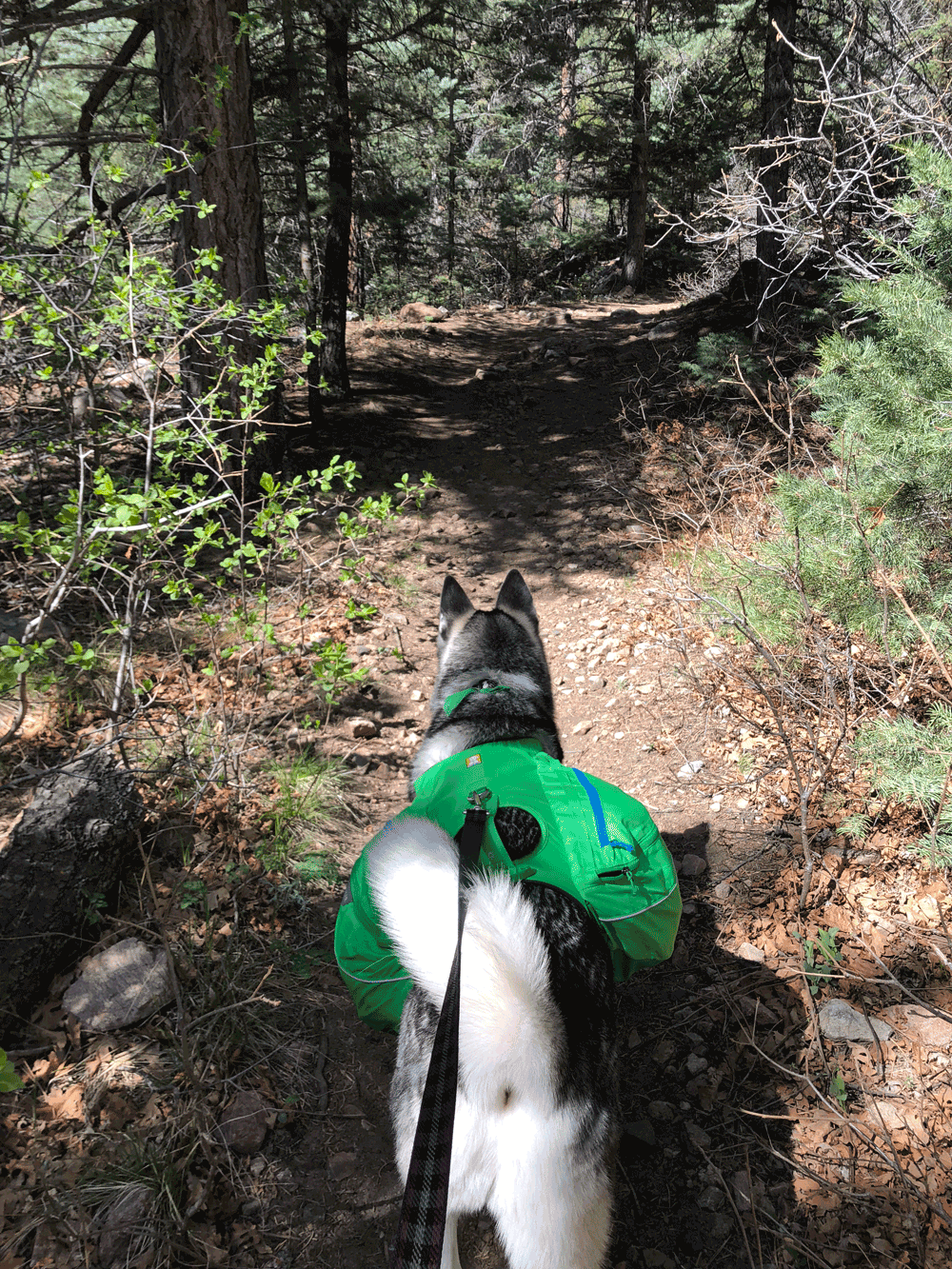 The idea for dispersed camping had come up earlier in the week, and I had laughed at the idea. 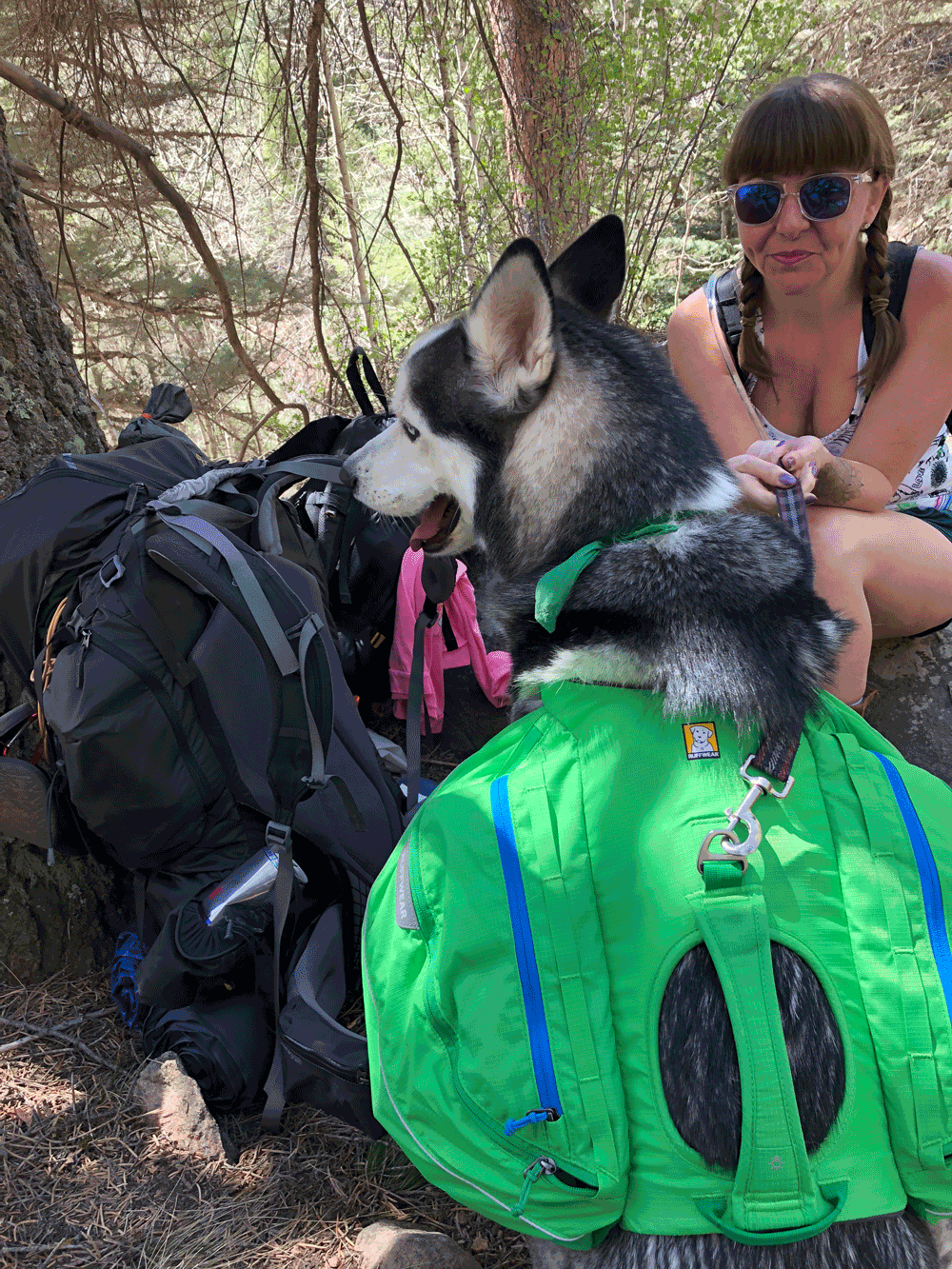 We chose Newlin Creek in spite of its distance from Broomfield due to it’s location in what is affectionately known as the “Banana Belt” of Colorado, an area known for maintain temperatures 5-10 degrees warmer than surrounding areas. This was important because I refused to backpack in weather that would have me sleeping in the 30s. Newlin Creek was projected to be mid-70s during the day, and mid-40s at night. 40s I could handle; I was not prepared for near-zero sleeping conditions. 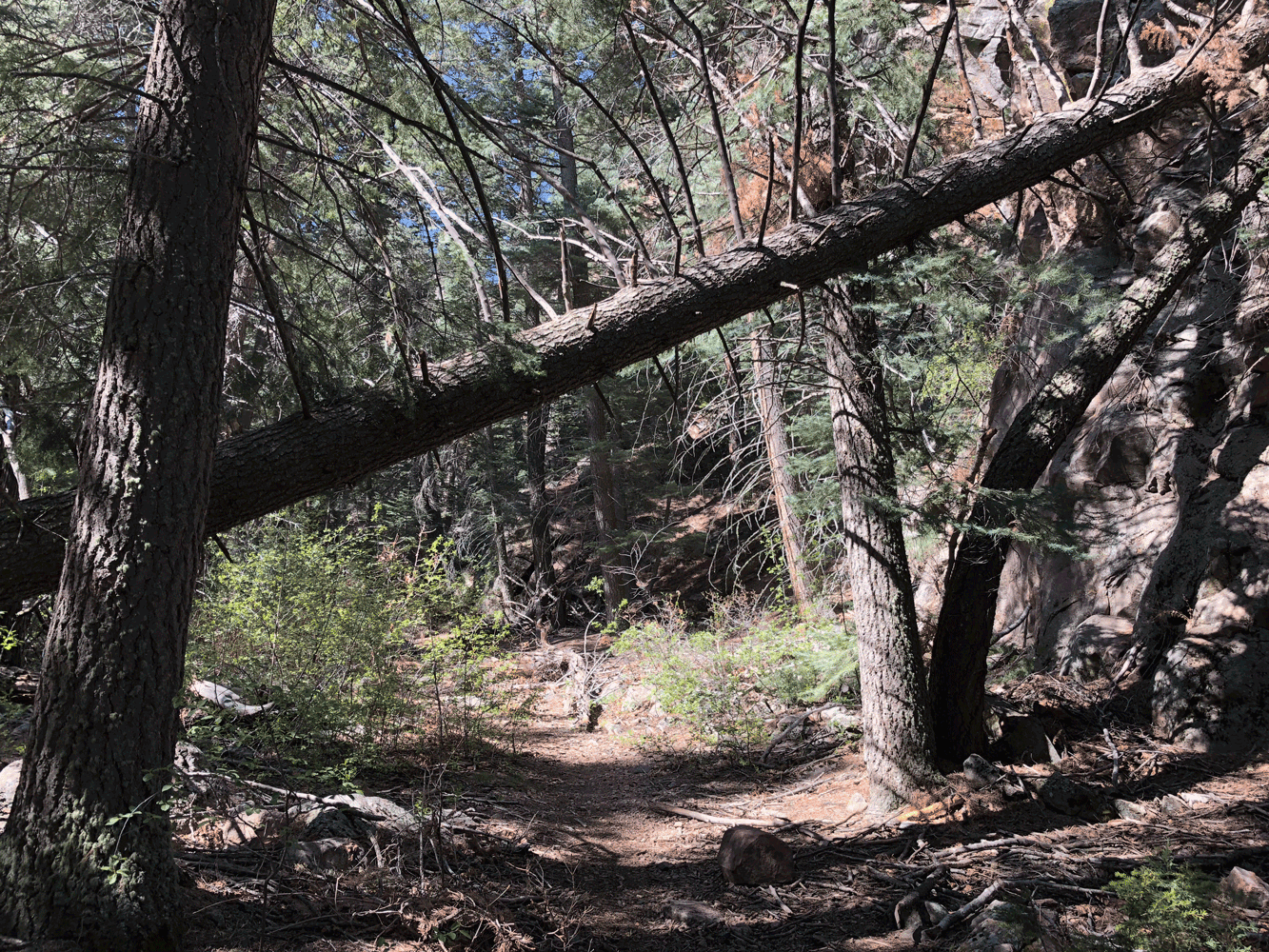 While it has been more than ten years since I’ve backpacked, I tend to carry a backpack full of rigs, drones, cameras and crew equipment like first aid kits along most of my hikes and day trips, so I wasn’t totally unaccustomed to the weight. Jordan had never backpacked before. For someone who has never carried a pack, there’s quite a lot to get adjusted to, including how you situate the weight on your hips (rather than your shoulders, like normal book bags). Needless to say, we wanted a shorter trail to avoid any issues with pack weight and exhaustion. Also, I’d grabbed a backpack for Sven, which he had never hiked with, so we didn’t want to have to carry his pack for an extended period as well should he wear out or refuse to do so himself. 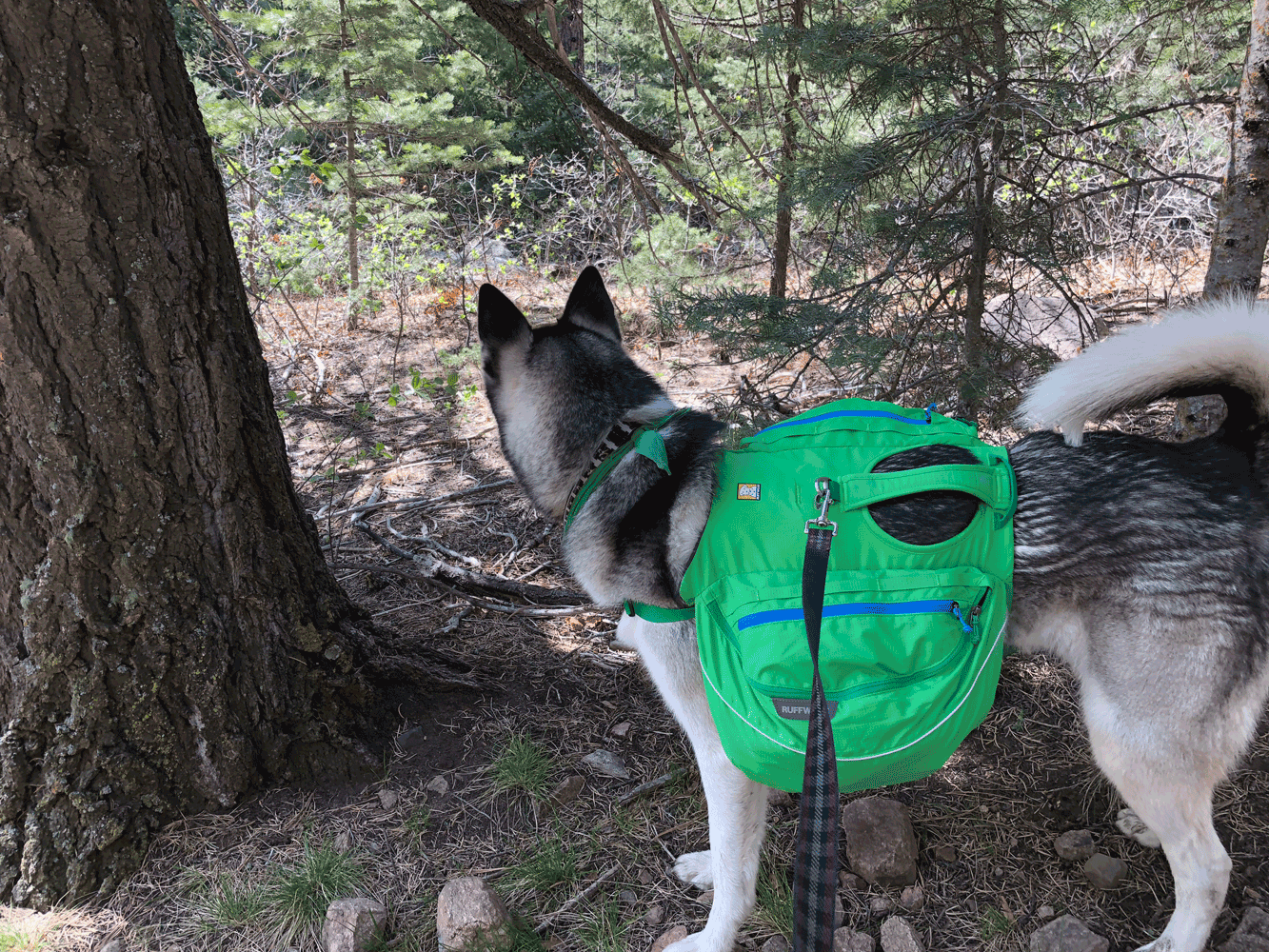 We started out Saturday morning, leaving around 7:00AM to arrive at the trailhead around 9:30am. The last mile before the trailhead is not for city cars. Make sure you have decent ground clearance and 4×4 wouldn’t hurt.

The hike up took three and a half hours for around 3.6 miles. We took a short detour at one point where it wasn’t clear where the trail went, and we also set up camp before turning off the timer/tracker. Over the course of that time, we passed countless small waterfalls along the creek which we crossed more than 20 times along the trail. It’s an incredibly scenic trail, though it doesn’t grant many views until you get to the very top. During the first bit, I thought we might have to slow down or stop early, but we were able to push through and get about a mile and a half in before the true weight of our journey began to sink in. Luckily, after another half mile, we ran into two older gentlemen who let us know the trail was six miles round-trip, not six miles in and then six miles out. We instantly went from 1/3 of the way to 2/3 of the way there, and a fresh surge of adrenaline pushed us for that last mile (ish). 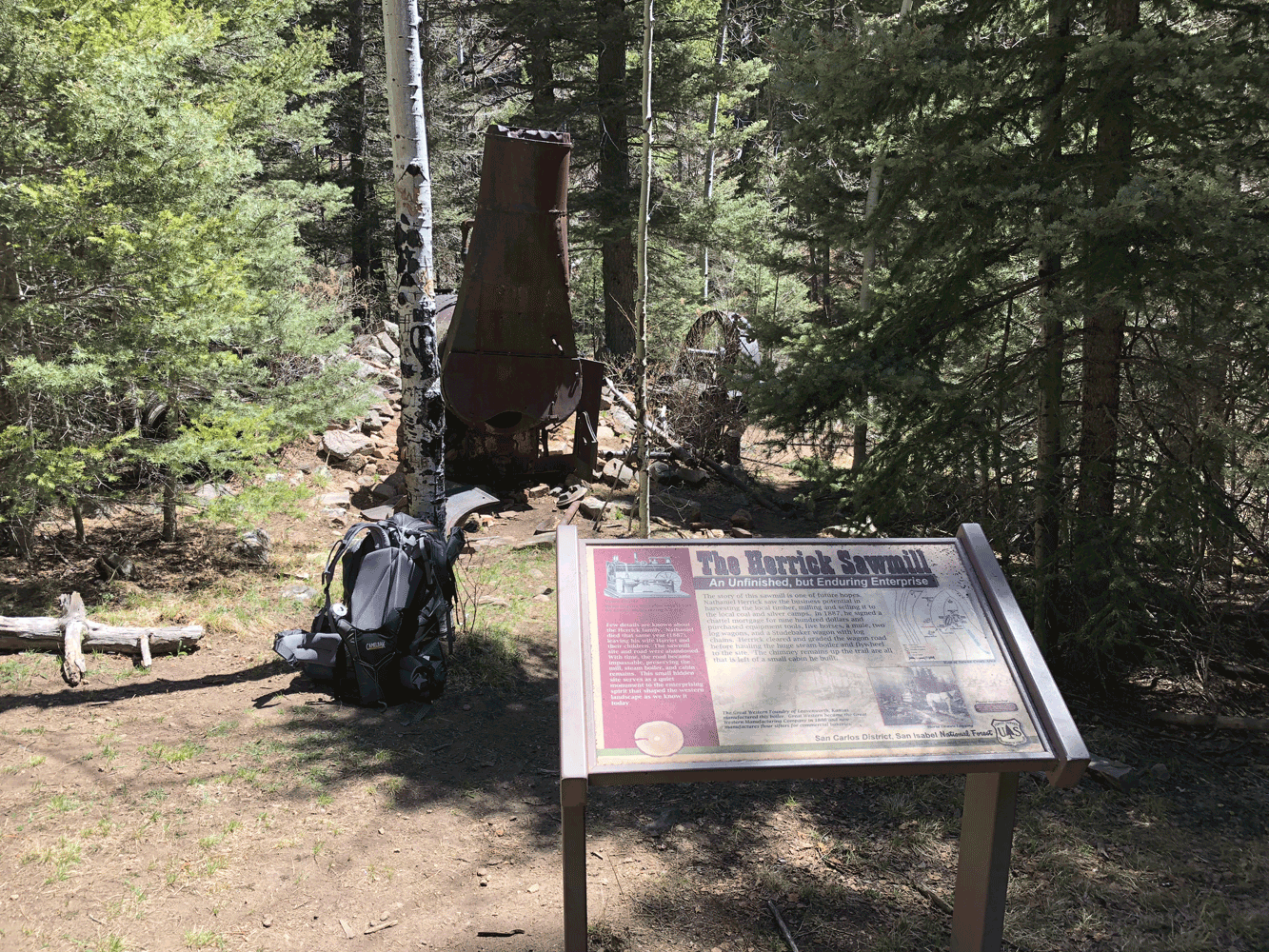 When I reached the sawmill at the top, yelling “I’m here,” an incredible sense of satisfaction (and exhaustion) set in. We set up the hammock and tent, then proceeded to gather firewood in multiple sizes to allow us to sustain a fire throughout the majority of our time there. Luckily, Newlin Creek fell just outside of the fire ban zone, allowing us some warmth and entertainment that would’ve been otherwise hard to come by.

Speaking of entertainment, the sawmill I mentioned earlier was originally hauled up the mountain by a man with dreams of turning the forrest into a timber mill. For reasons unknown, the sawmill was never fully assembled, yet remains at the top of the trail to this day. We’re talking something like THREE TONS of metal that was hauled up the side of a mountain (between trailhead and sawmill you gain 1600 ft in elevation). That is truly an incredible feat, and was fun to explore. 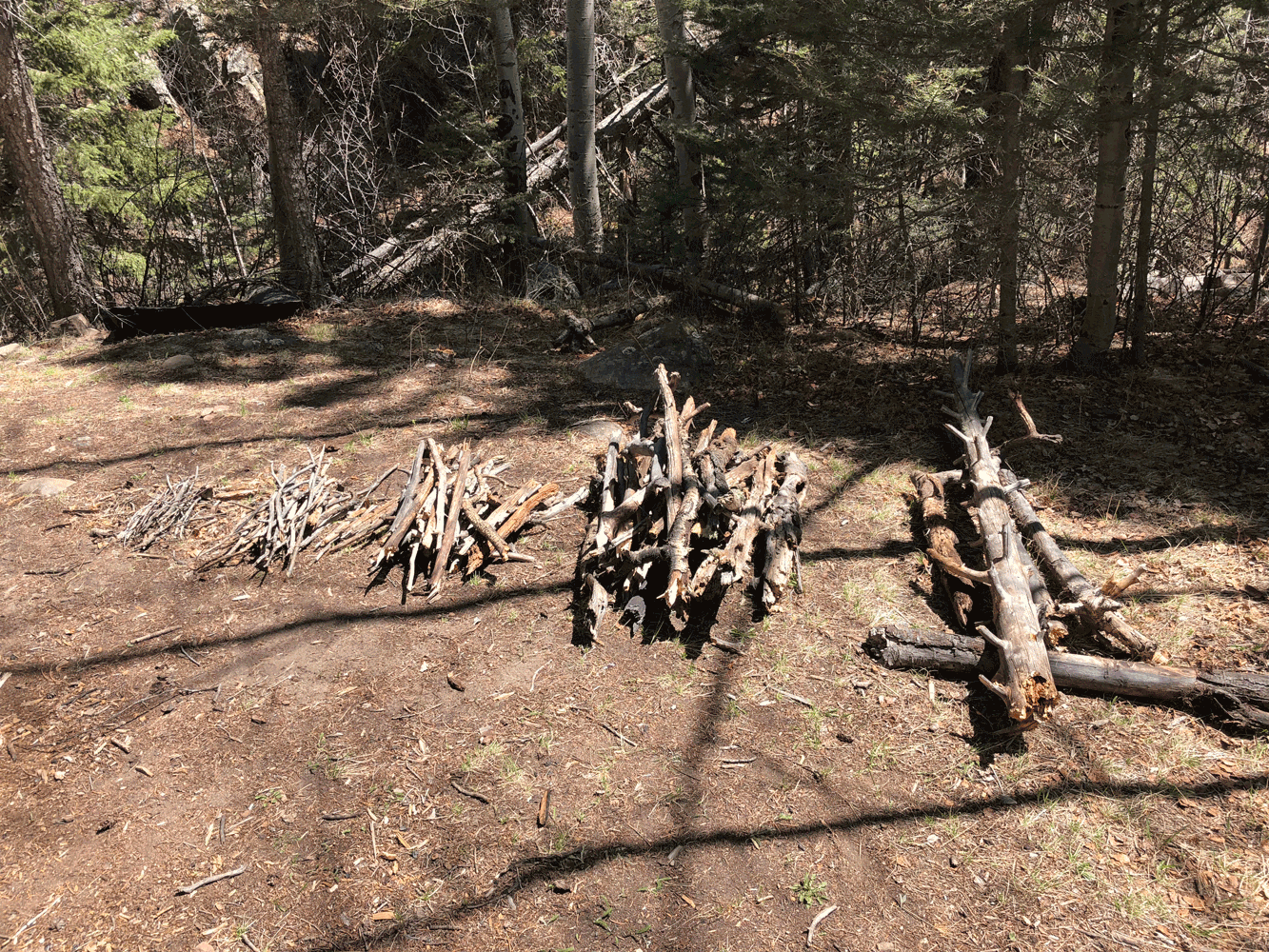 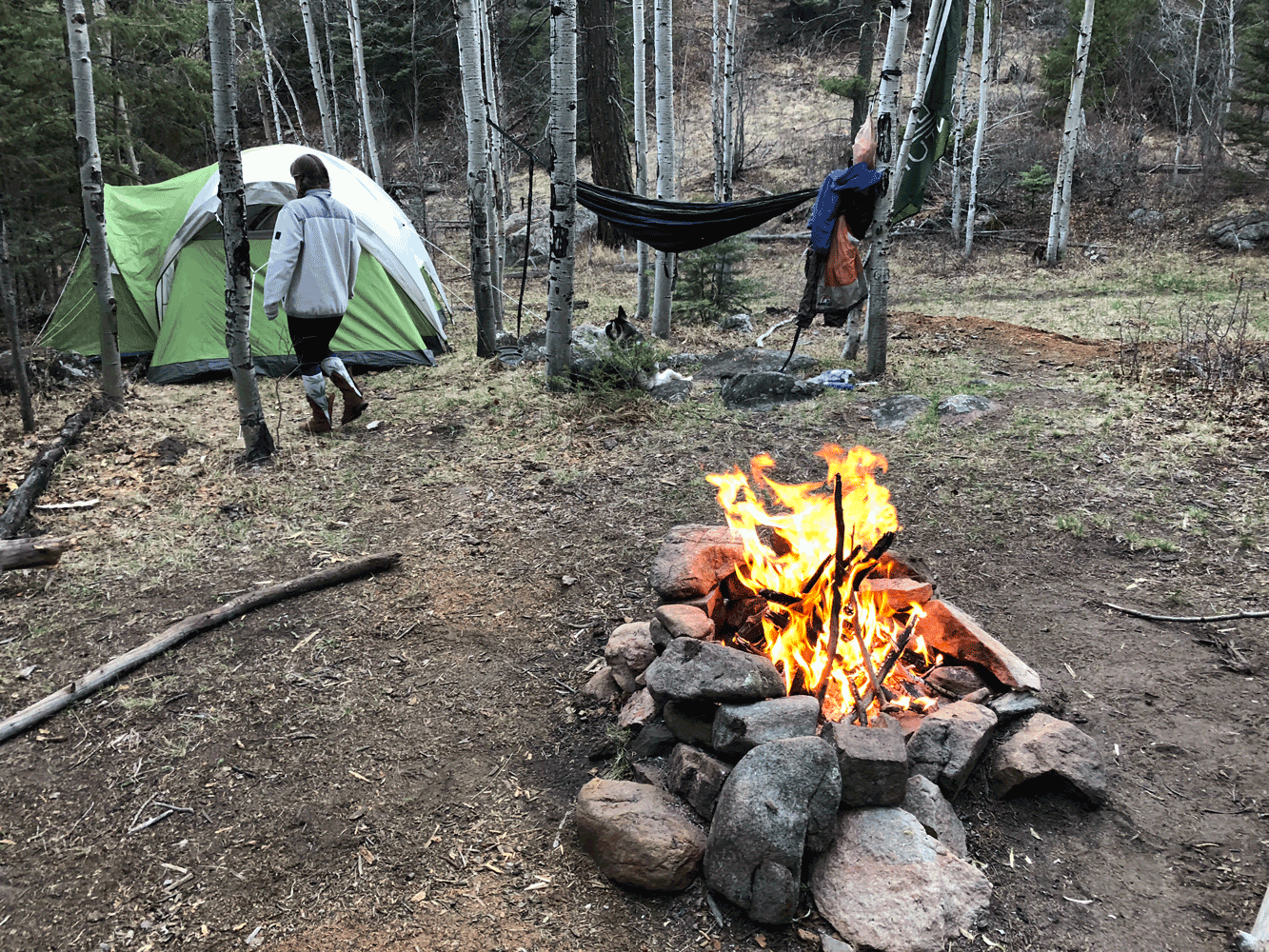 As we began to enjoy all that nature had to offer, sparking blunt after blunt, laying in the hammock, and building a small fire, we began to think about food and dinner. I built the fire up until it was blazing. I’d hauled stones from around the area to build up the fire ring as there was some strong wind in the area. This allowed us to have a roaring fire with directional heat, without worrying as much about wayward wind dangers. We fired up the backpacking stove that I realized hadn’t been used in years, and cooked up some dehydrated pasta primavera and beef stroganoff. Afterwards, we enjoyed marshmallows and hot cocoa, followed by some colorful additions to the fire. As the stars began to come out, we piled on layers of clothing and laid in the hammock, smoking the rest of the blunts while staring straight up through the Aspen and Pine tree canopy. Had we not had to hang a bear bag and put the fire out, I could’ve easily fallen asleep under the stars. Hours later, shivering in the tent under multiple layers of clothing and a sleeping bag, I was glad we’d come into the tent. 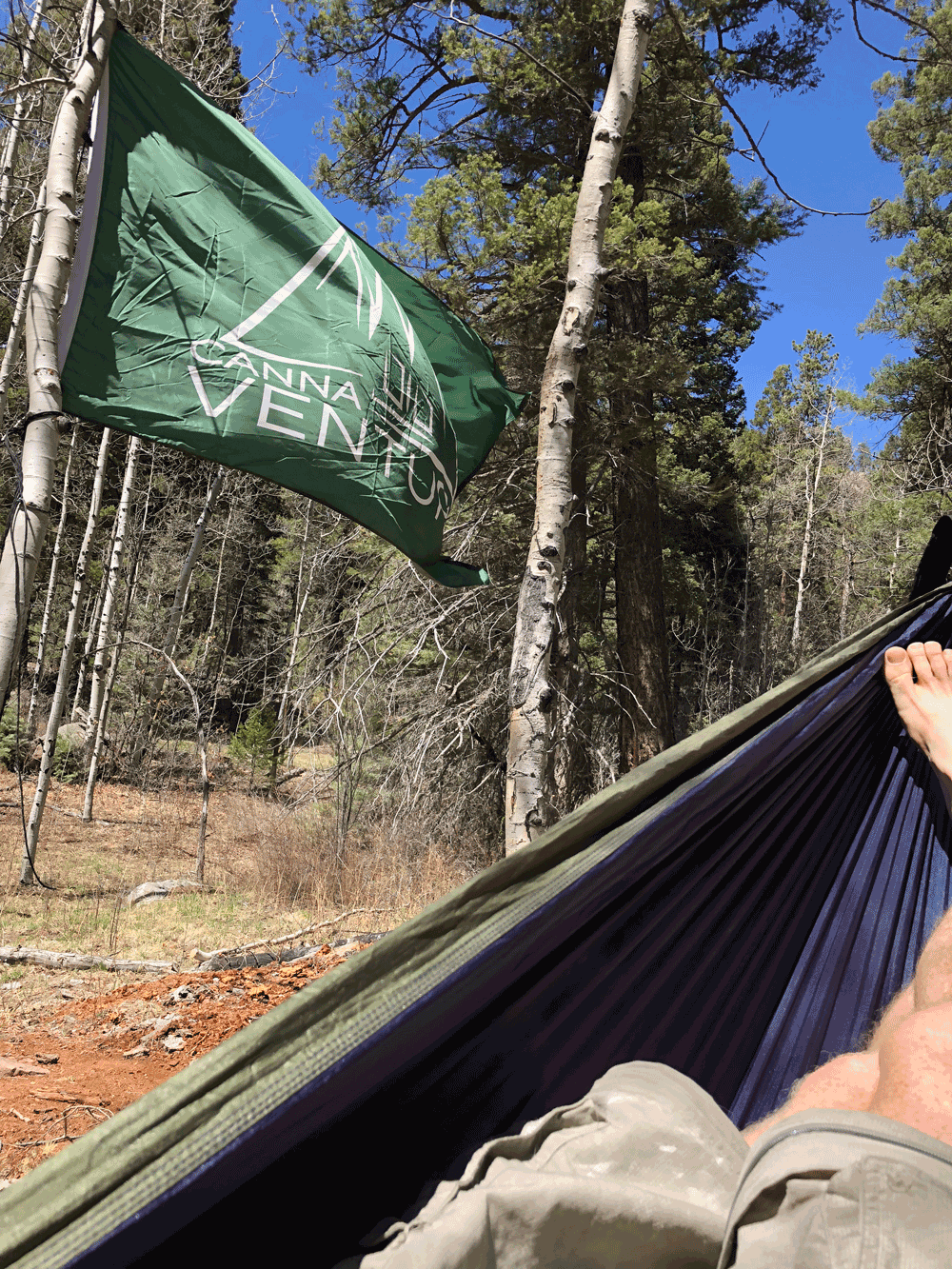 Needless to say, I didn’t sleep amazing. I was up around 5:00am and figured the best way to warm up and relax was a blazing fire. One of my favorite parts about camping with my family was waking up to see my dad outside with a roaring fire waiting for the rest of us to sleepily make our way to the warmth. It’s a tradition I seem to have taken up, because I had a fire lit before the sun came up. When Jordan gave up trying to sleep in the cold to come out to the ire, we began to make breakfast. My breakfast hash (hash brown casserole) lacked eggs or cheese (womp) but could easily be spiced up with tobacco or picante salsa (ask Taco Bell or McDonalds for extra packets for camping). The granola with milk and blueberries was mildly disappointing, but hard to compete with chorizo, green chiles, corn, black beans and hash browns. 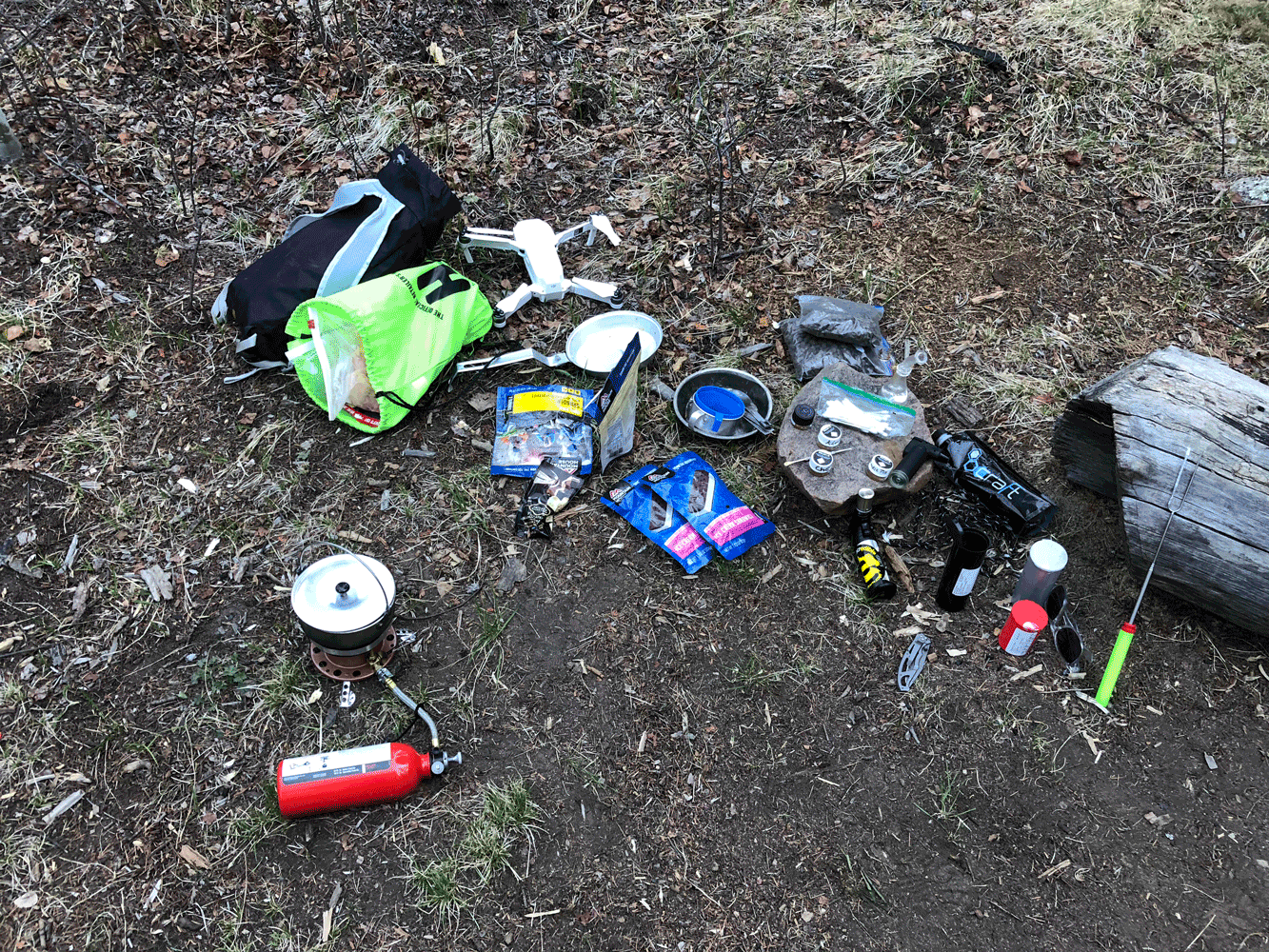 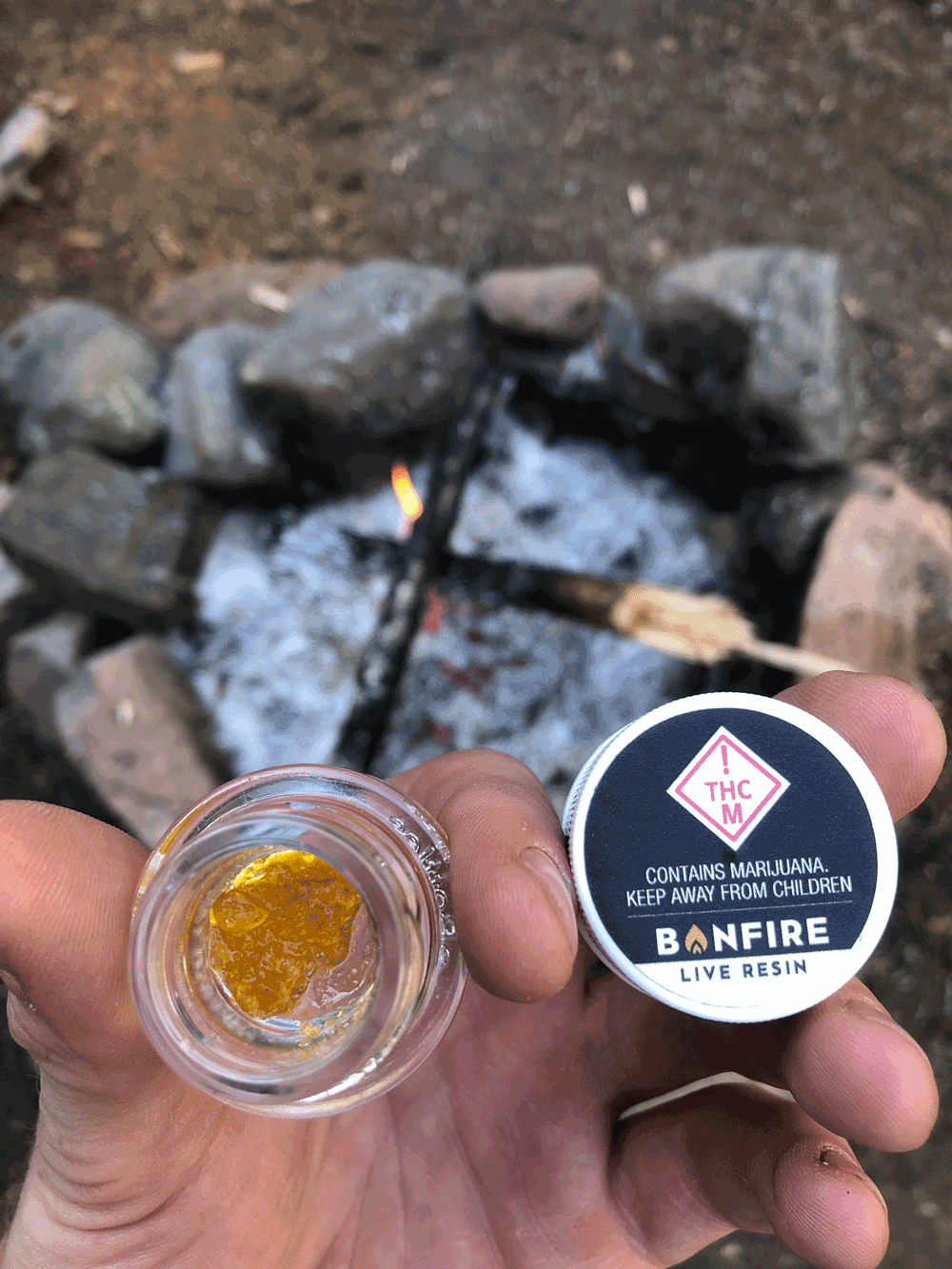 While Saturday was spent enjoying blunts, Sunday was for dabs. I say “was,” because Sven decided to jump over the entire dabbing and cooking area, knocking the rig over mid-morning. Luckily, I McGyver’d a rig that we used for the rest of the day in addition to bowls and a glass blunt Slider. While we let the dog sit and think about what he’d done, we checked out the sawmill again and planned our dashiki up to the top of the mountain. If you continue a half mile or so past the sawmill, it gets really steep, but eventually offers an incredible view of the Valley and Pikes Peak. 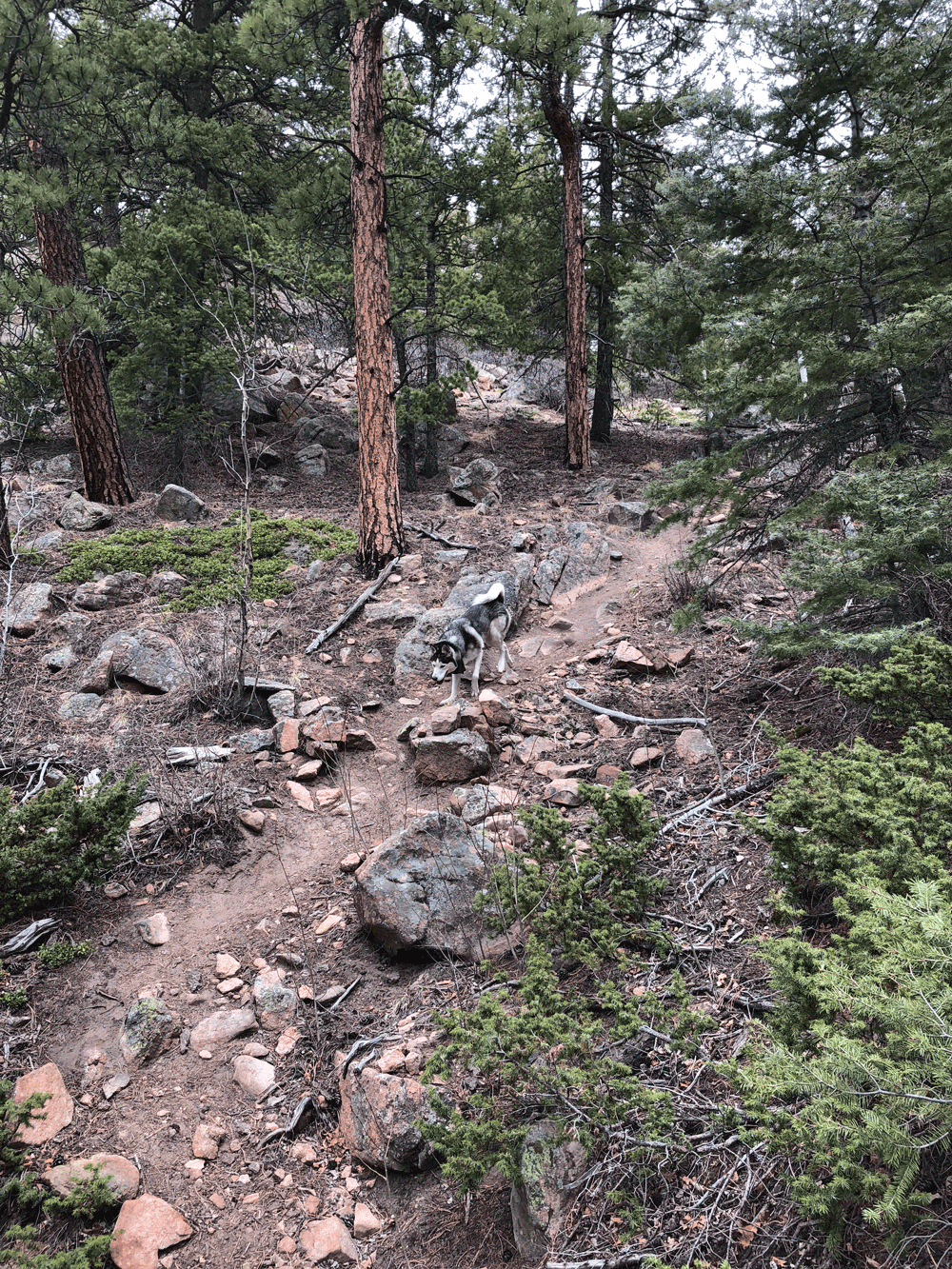 In an effort not to wear ourselves out completely, we headed back down to camp to pack everything up while enjoying snacks for a gradual lunch spent grazing on tuna salad, Babybel cheese and trail mix. After packing up camp, we made sure the fire was out, placed the extra rocks in the center and ensured no trash or gear remained. Leaving no trace is important when you’re camping, and especially important when backpacking/dispersed camping, as you’re enjoying aspects of nature that are relatively undisturbed by the nuances of humanity; let’s keep it that way.

The trip down was a lot easier and worked and entirely different set of muscles, ensuring that the next day’s aches would be a full-body experience. It took us an hour and a half to descend the trail, motivated by pizza and the creature comforts of an actual bed and a hot shower. After stopping for our hard-earned pizza in the Springs, we made the two and a half hour journey back up to Denver full of immense satisfaction that can only be achieved through pushing your body to its limits in pursuit of the natural beauty this world has to offer. 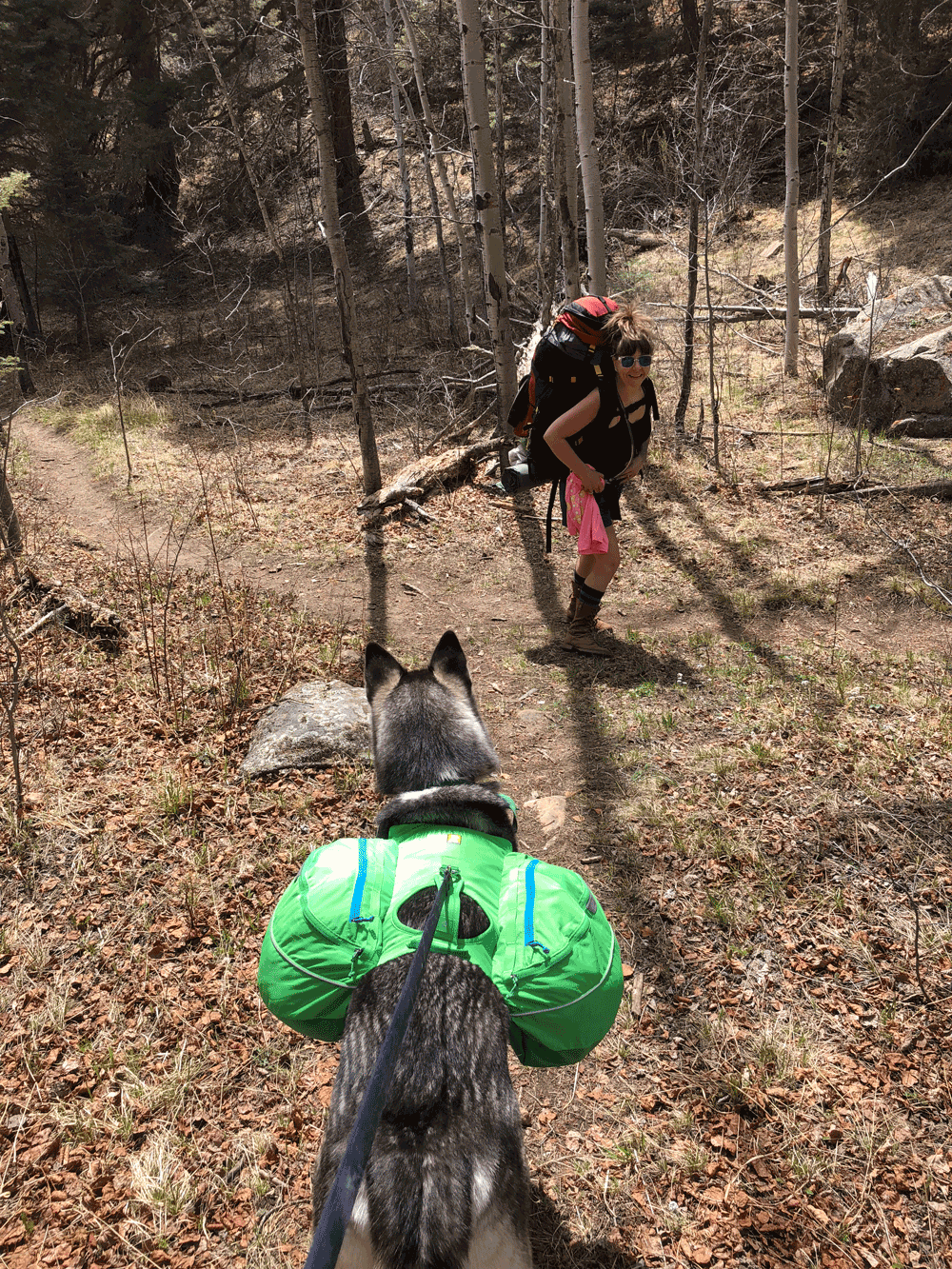 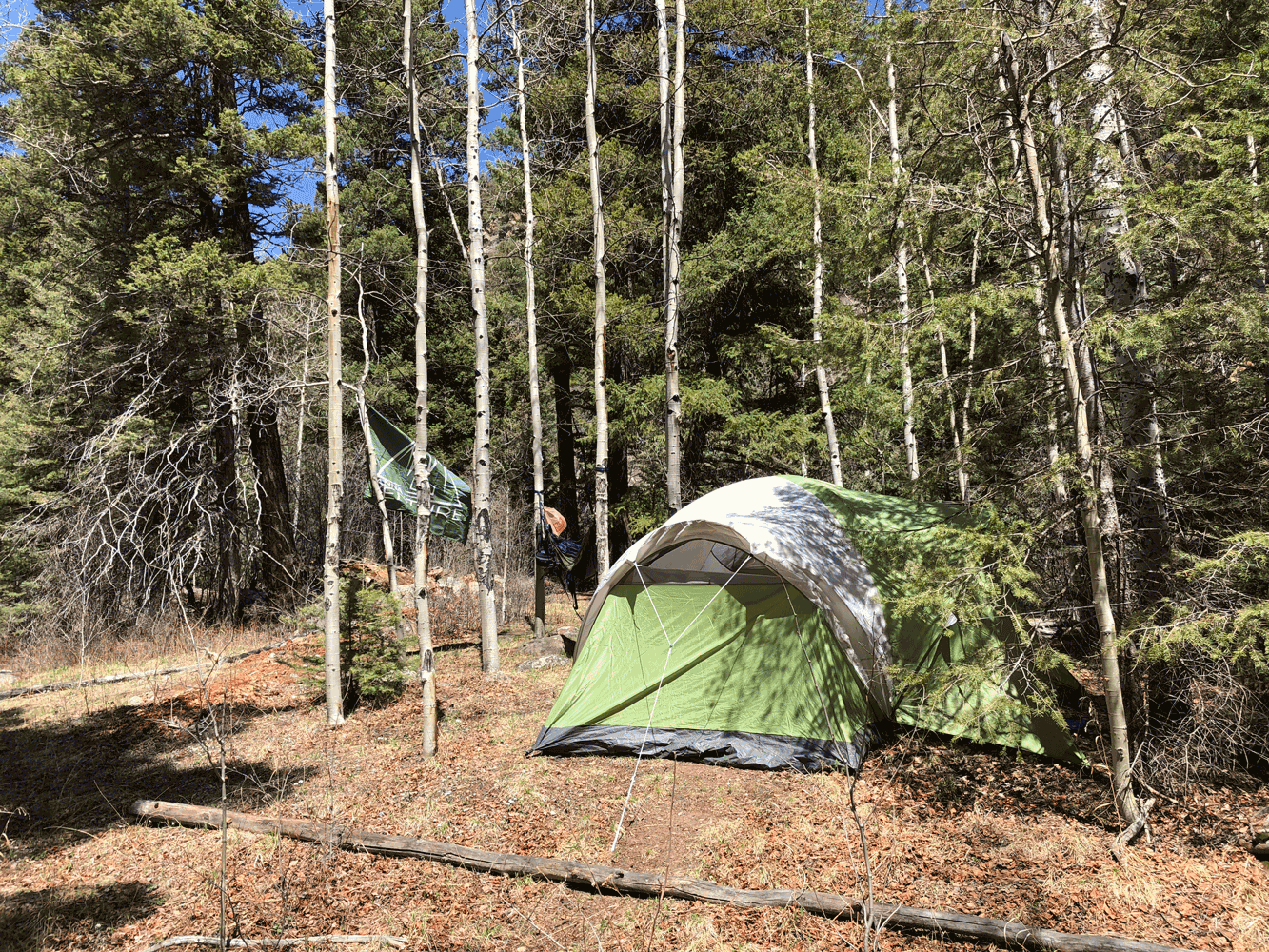 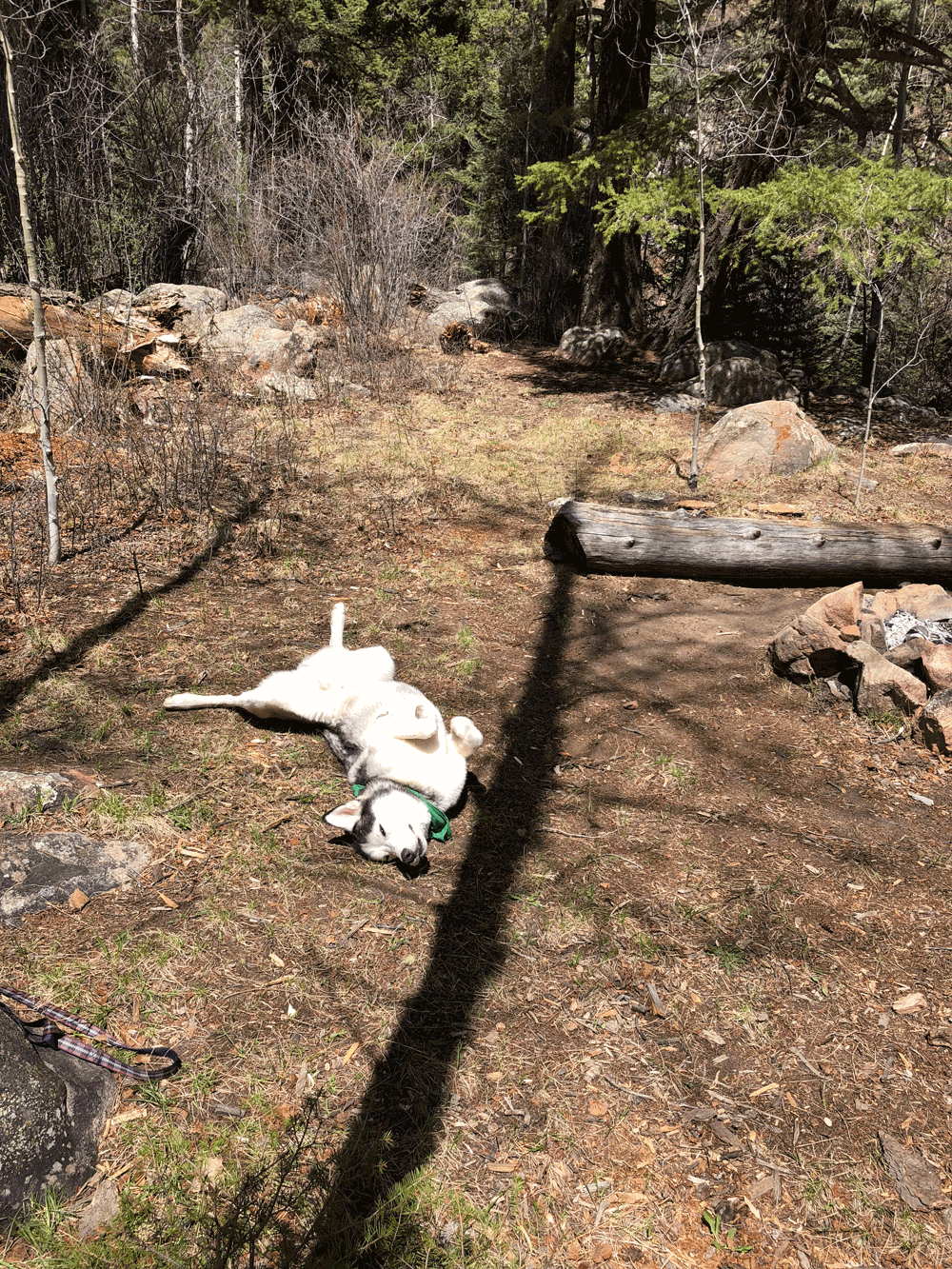 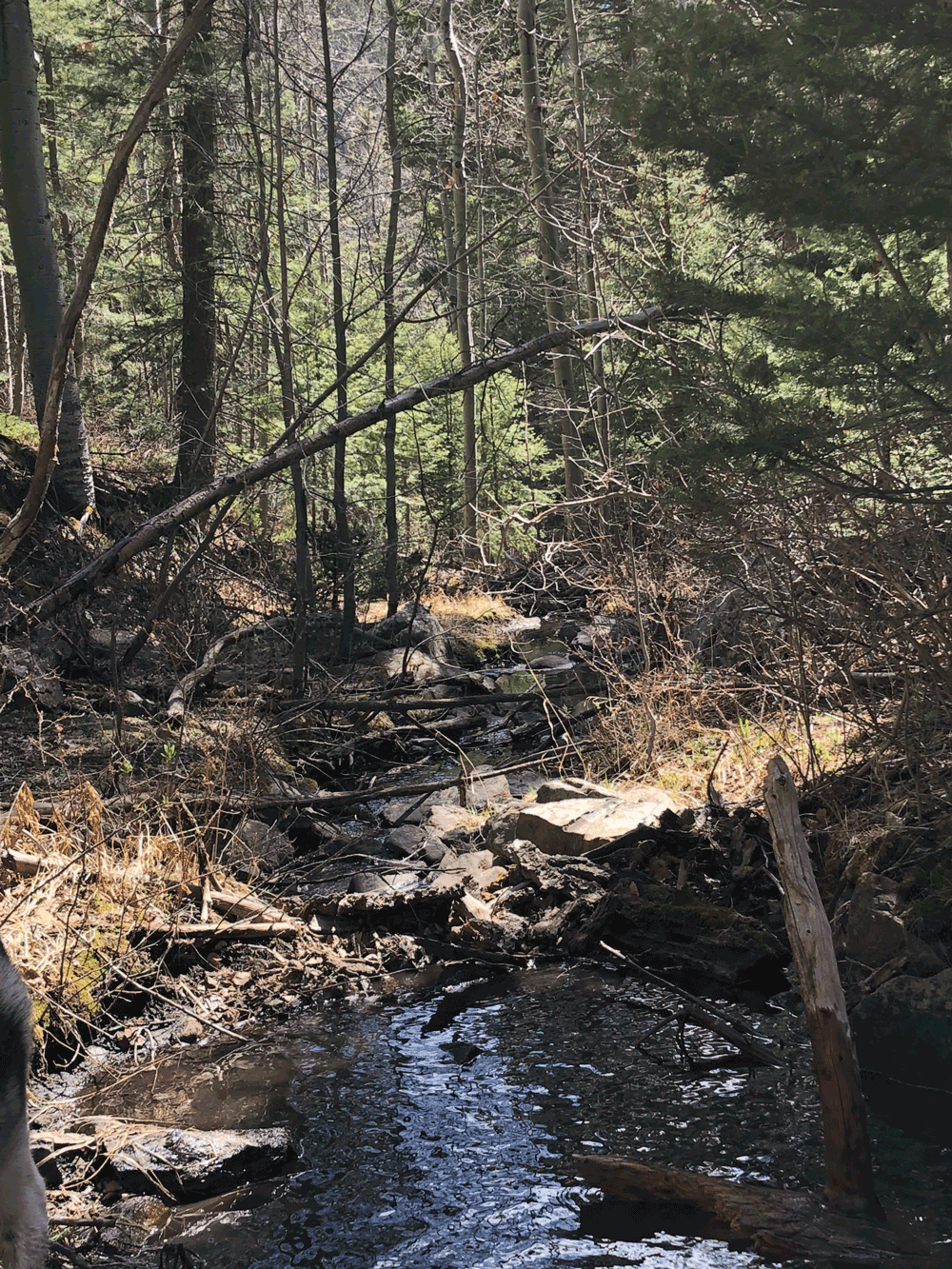 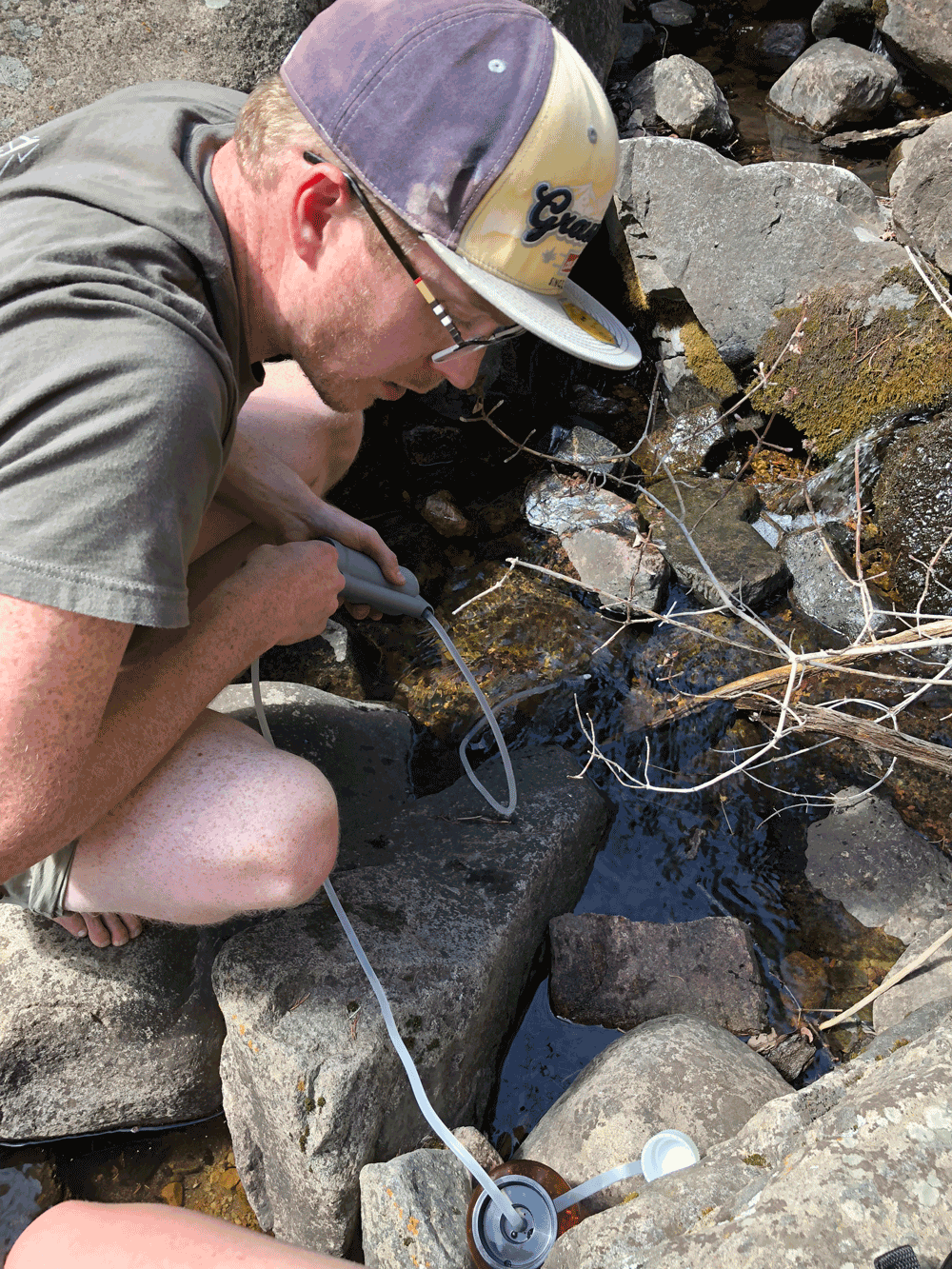 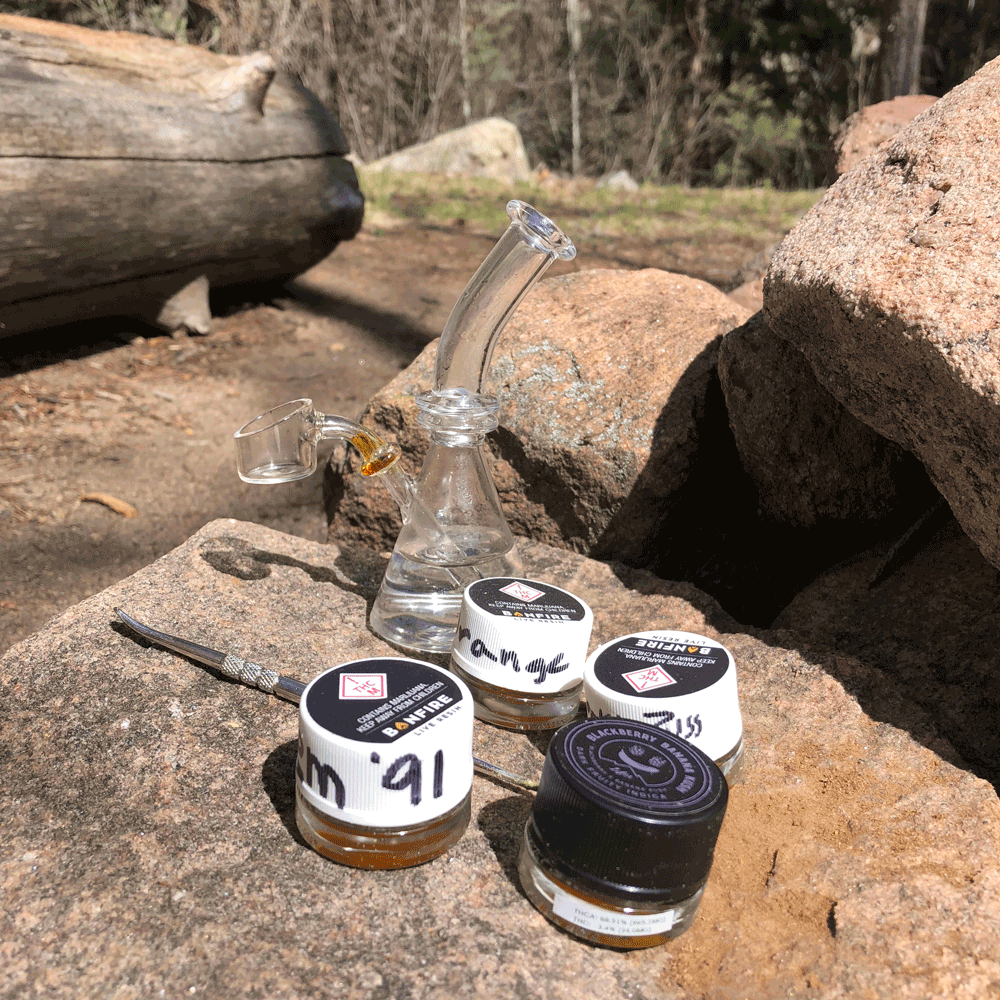 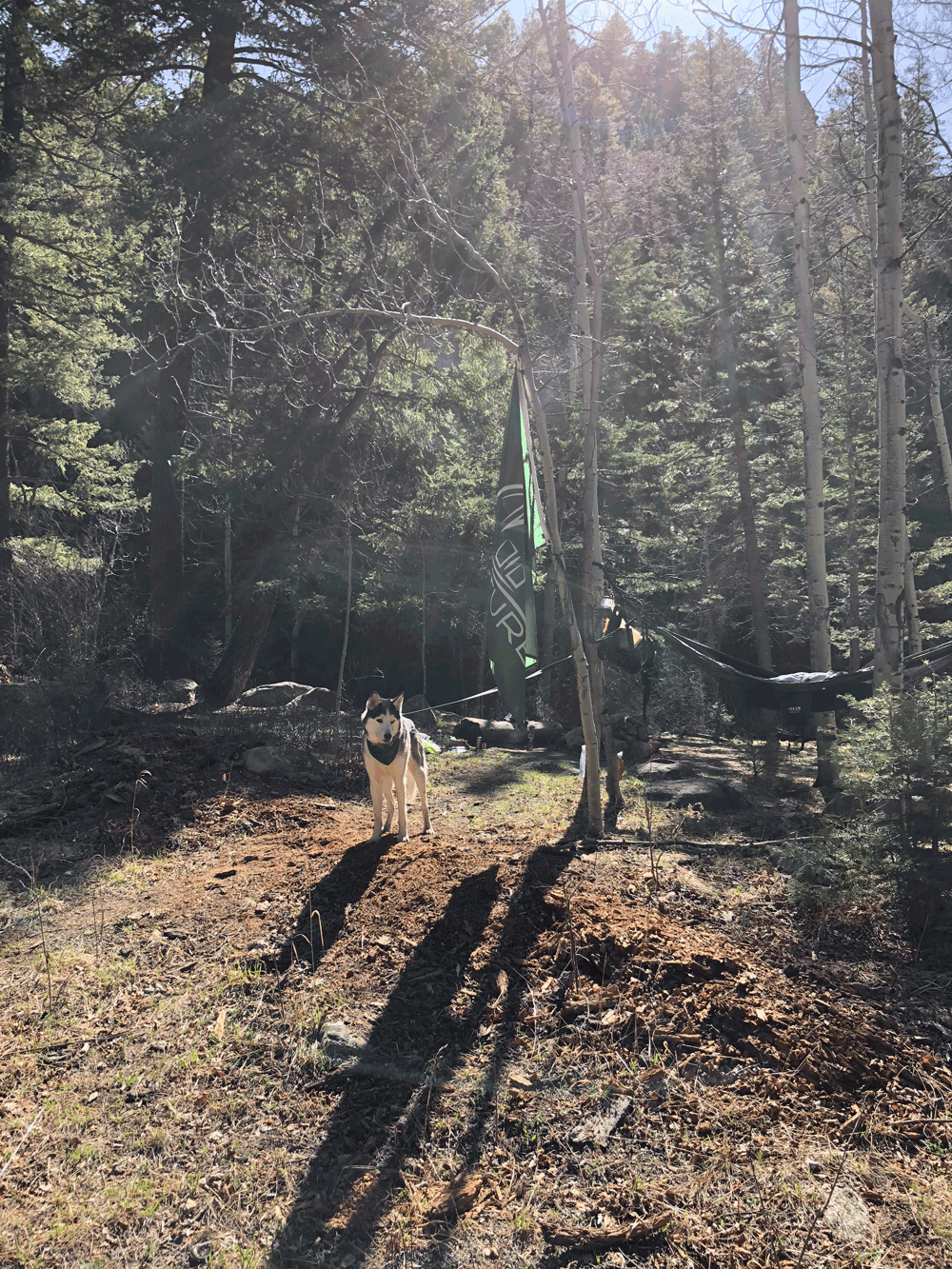 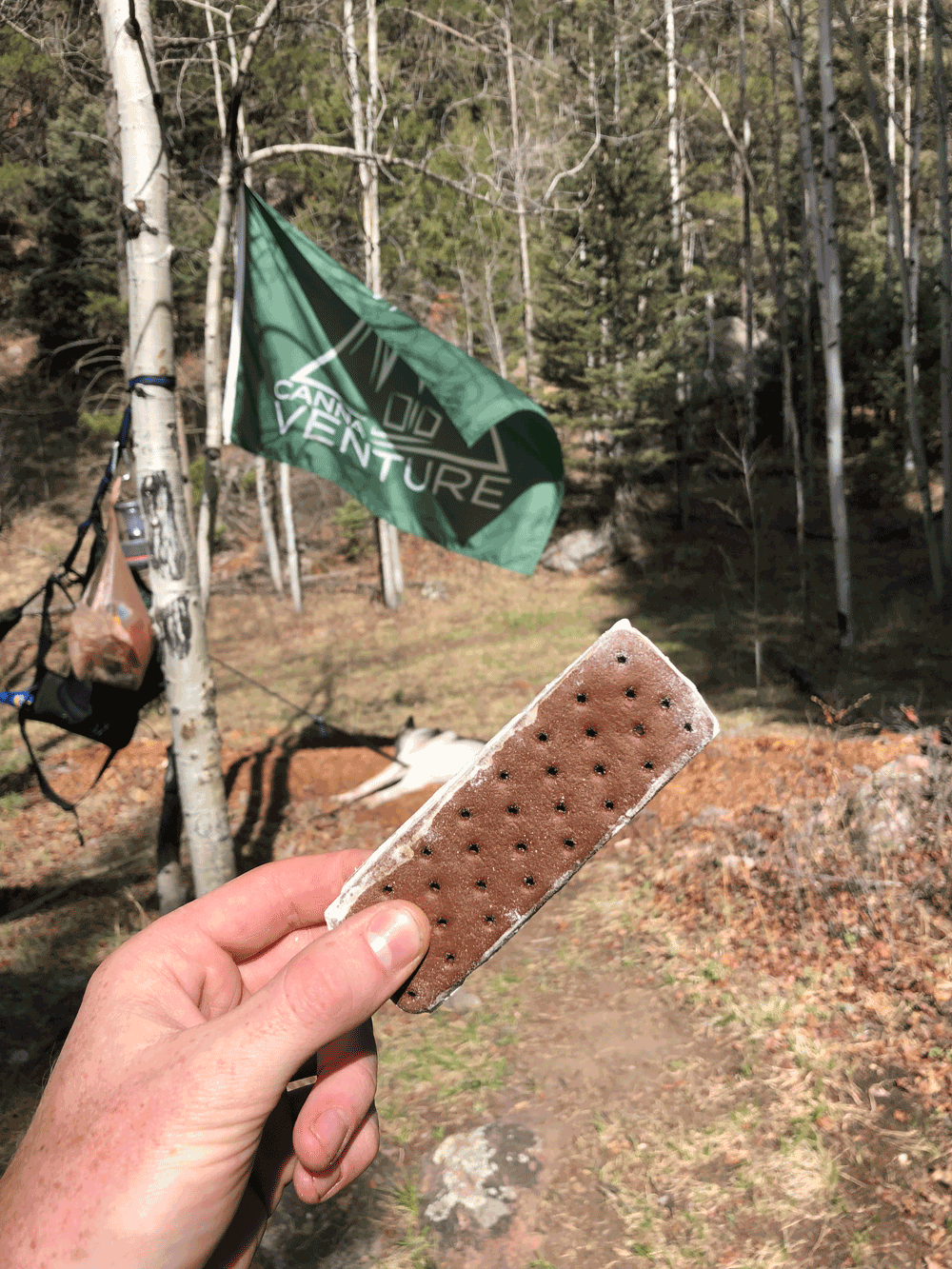 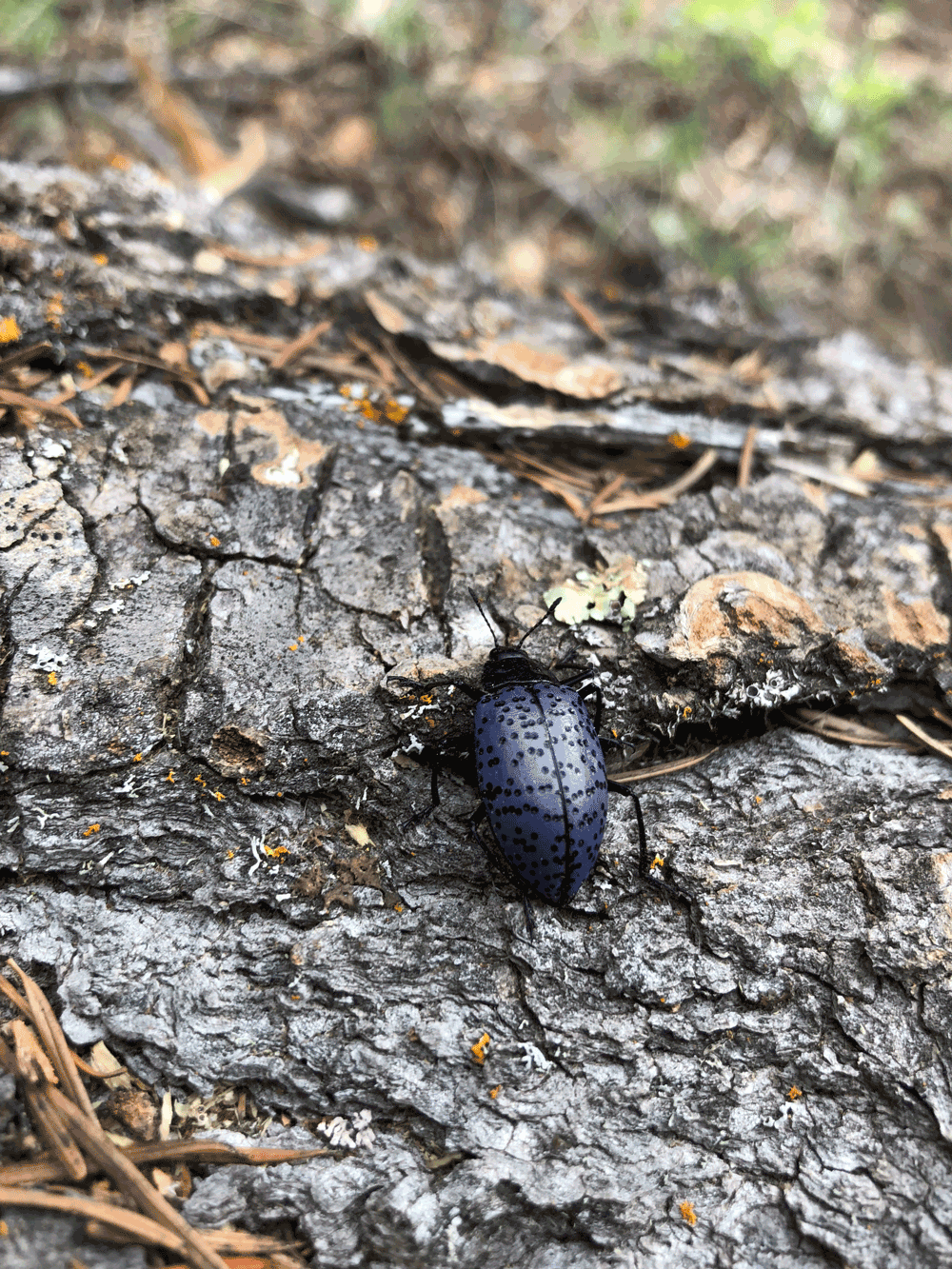 Best Part: Being backpacking, everything working out, having a water purifier and stove to make everything easier.
Worst Part: Cold nights, my Boveda packs exploded/popped in my bag of weed, cigars and blunts on the way up the trail (luckily I individually packed everything) and Sven broke the rig.
Trail: Newlin Creek Trail – Florence Mountain Park
Distance from Broomfield: 2 Hours, 45 minutes
Trip time: Two Days
Time of hike: First weekend of May 2018