Well, we have finally entered those Summer months. If last week’s hike was any indication, Summer is in full swing, and the 90+ degree temperatures are hitting Boulder and Denver and much of Colorado. Luckily for us, Evergreen experienced a bit of a cool down period before our third hike of the season, so the crew was treated to temperatures in the mid-70s as we made our way along the trail. Not only that, but the rain held out and only sprinkled on us at the top! 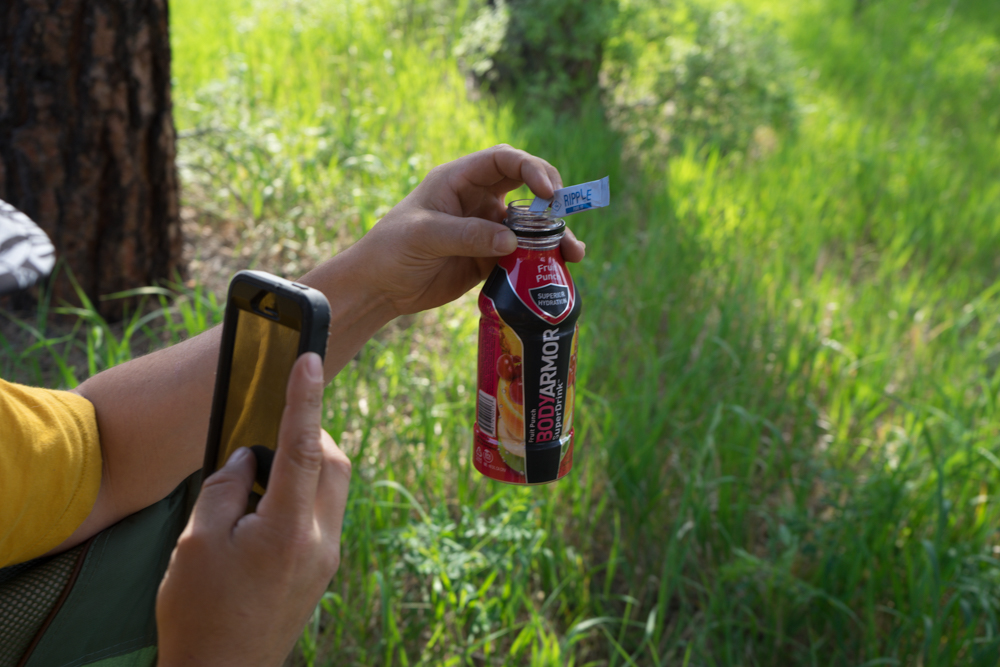 A group of about 20 or so people gathered at the east trailhead of Alderfer Three Sisters Park early this morning for our earliest and longest hike of the season. People began arriving at just after 9:30am, and the crew eventually would head out shortly after 10:00am to allow for such a long hike. 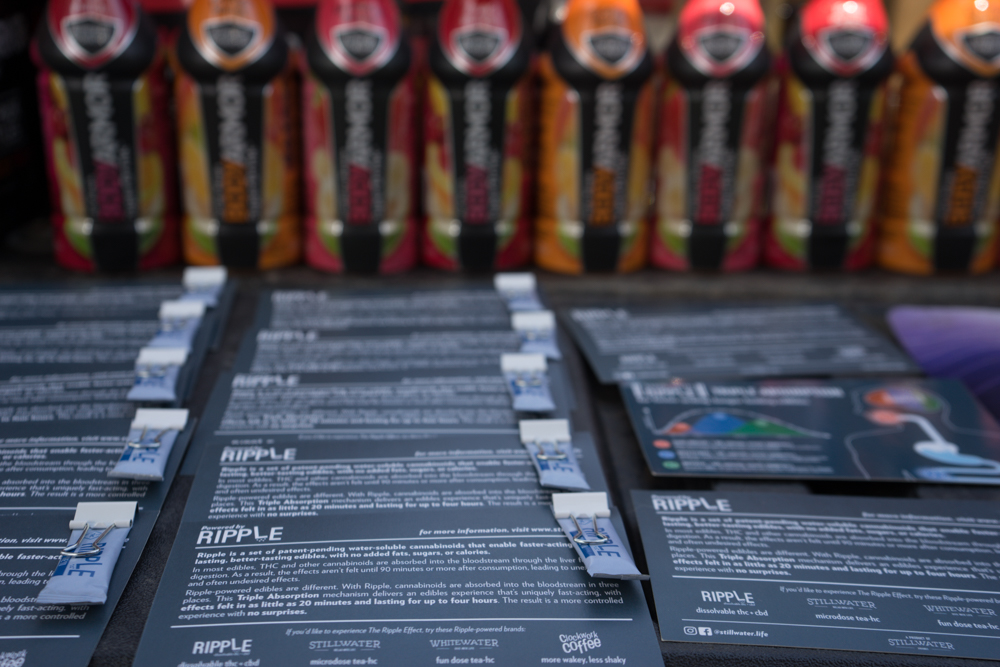 As the crew gathered, we chatted about the hike’s sponsor, Stillwater Brands, and their offerings. Specifically, Stillwater had made arrangements to allow CannaVenture to hand out some of their Ripple product to those attendees the registered in advance of the hike. Attendees were given a Ripple packet (either 10mg THC or 5mg THC, 5mg CBD) and a Body Armour sports drink to mix it in, creating their own infused refreshments for the hike. 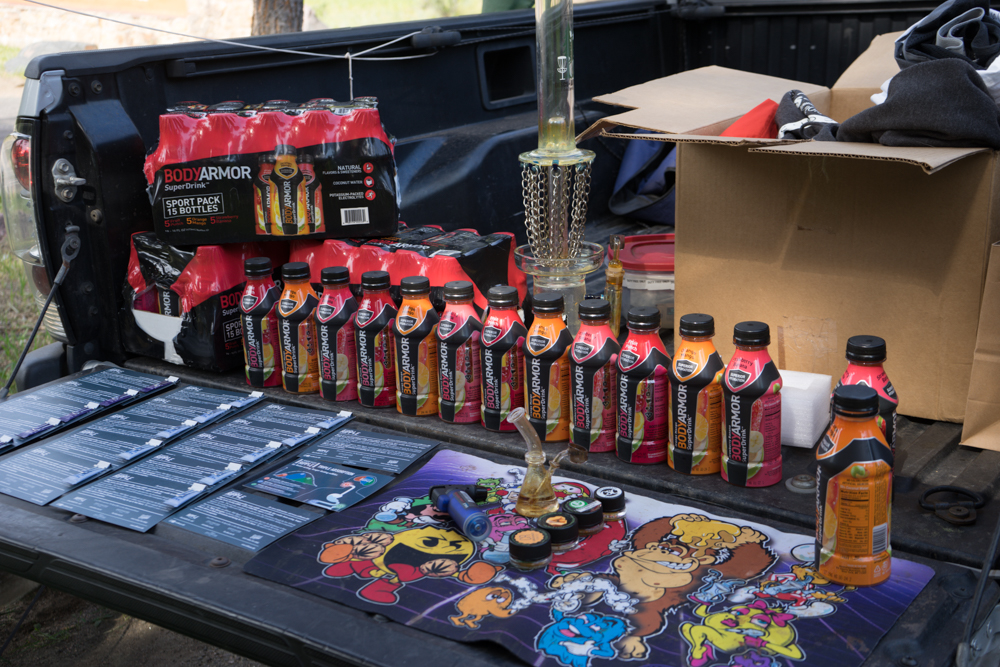 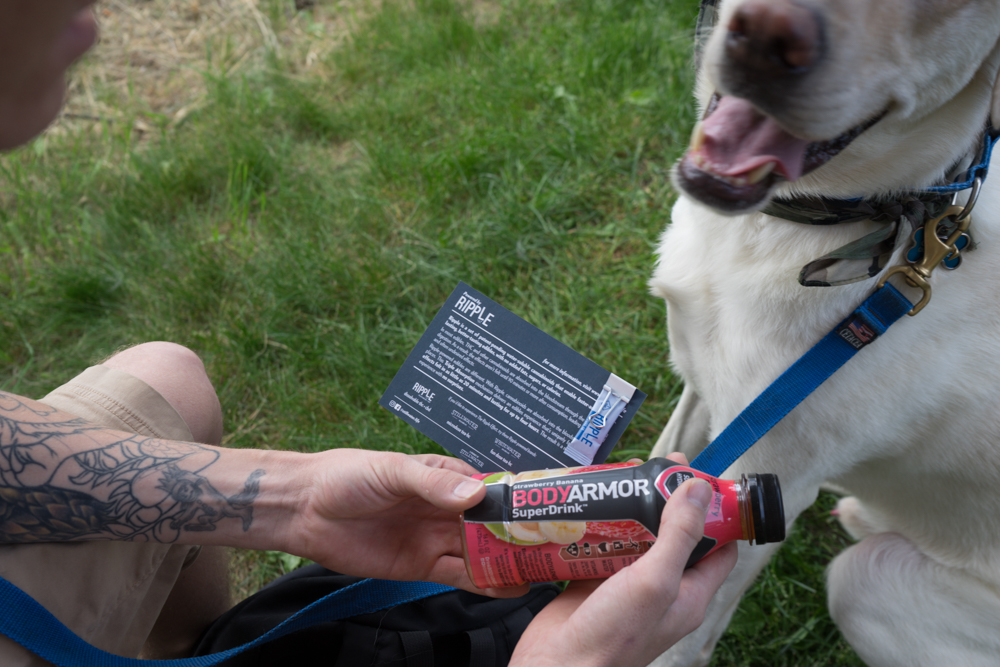 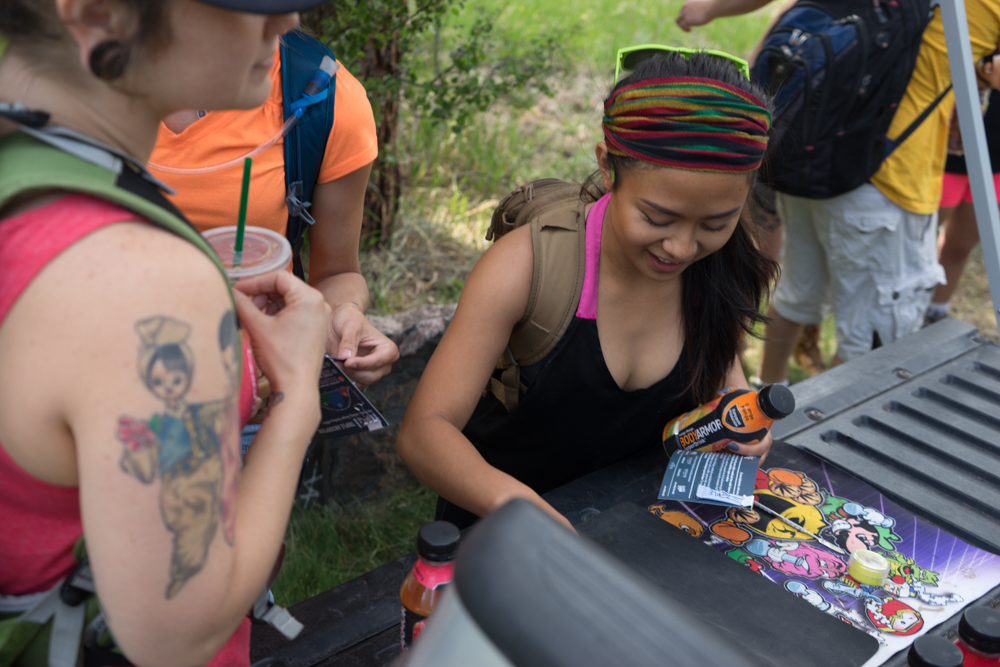 Because Jefferson County (and most of Colorado) is under a burn ban, we made it very clear to attendees that joints, blunts or any sort of smokable, combusted cannabis was not allowed on the trails and only permitted in designated, developed trailheads (there’s two of these along the trail, which allowed for a few brief smoke sessions). Each hike is a “Consume at your own risk” event, and we wanted to ensure that, even if people chose to consume, that they did so in a way that wasn’t endangering the forest and wildlife. We encouraged vaporization and edible consumption. 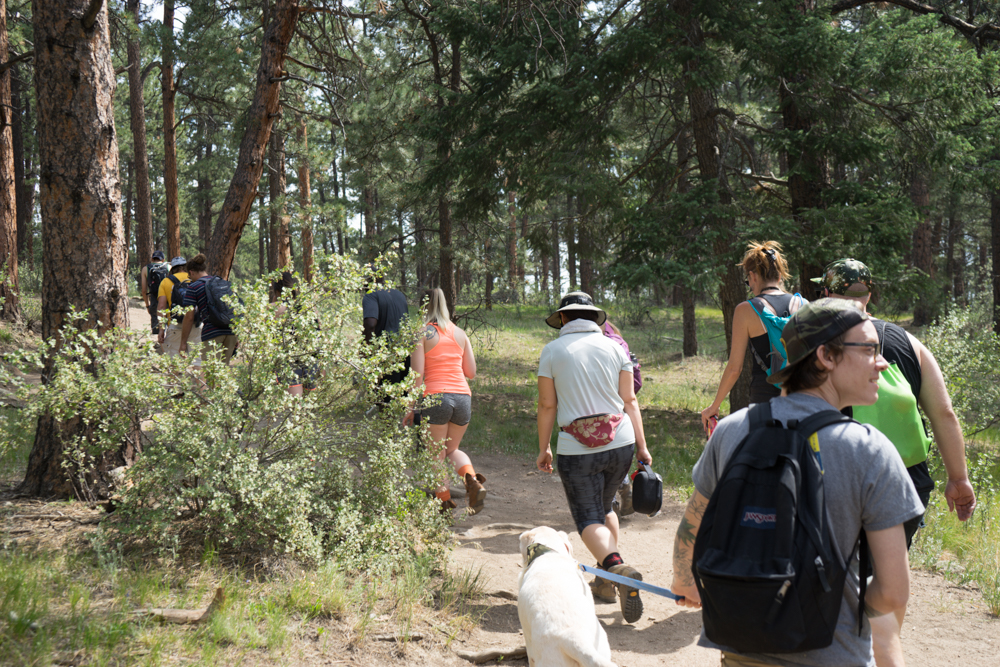 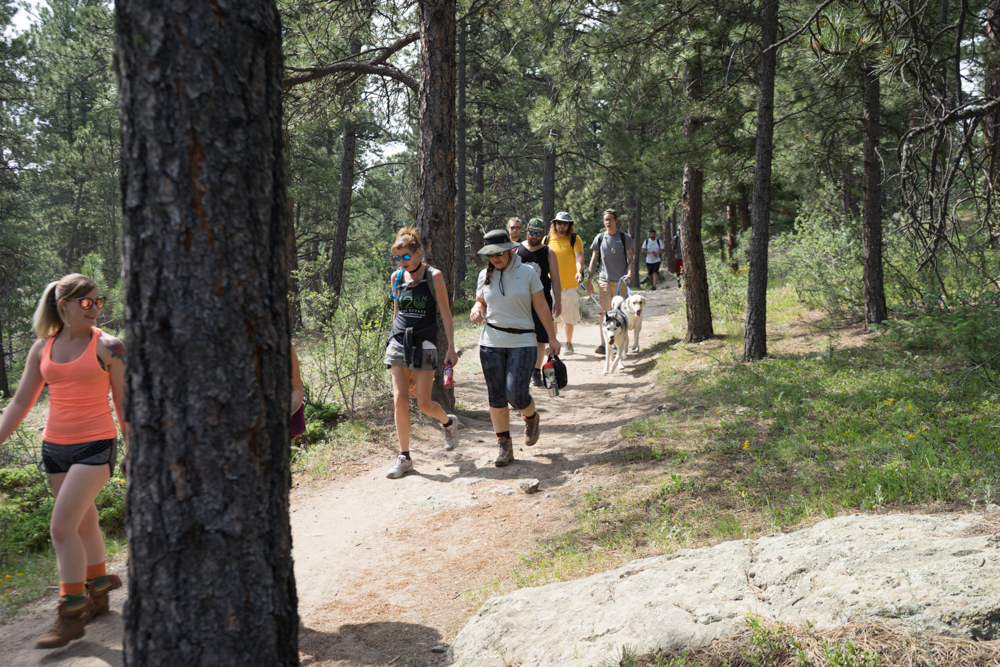 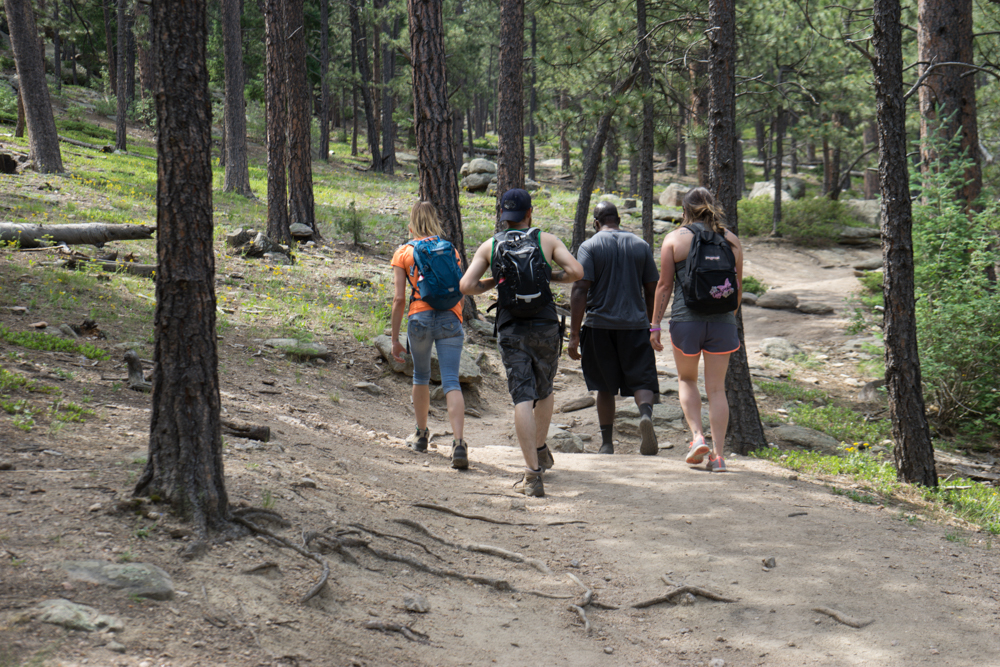 The crew set out just after 10:00am and made their way along the uphill trail, going counter-clockwise along the Alderfer Three Sisters Loop. The trail follows along Sisters Trail, makes it’s way to Silver Fox Trail, and then turns into Evergreen Mountain East Trail, which allows for people to divert up Summit Trail for views from the top. Most of our crew decided to take the extra mile or two up to the Summit, where we took a family photo and enjoyed some dabs and snacks before heading back down to join the rest. 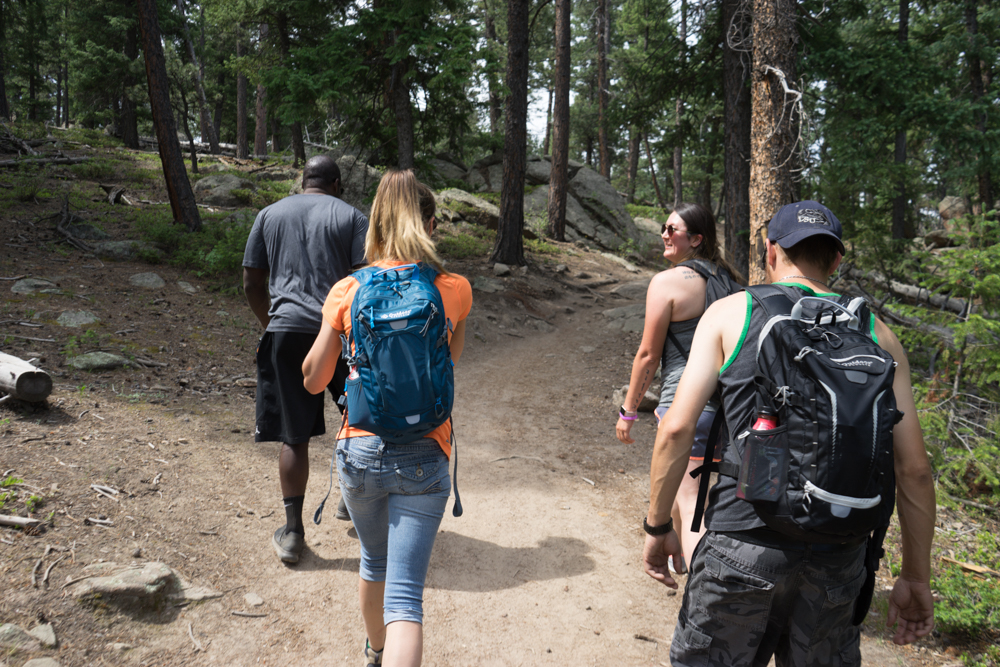 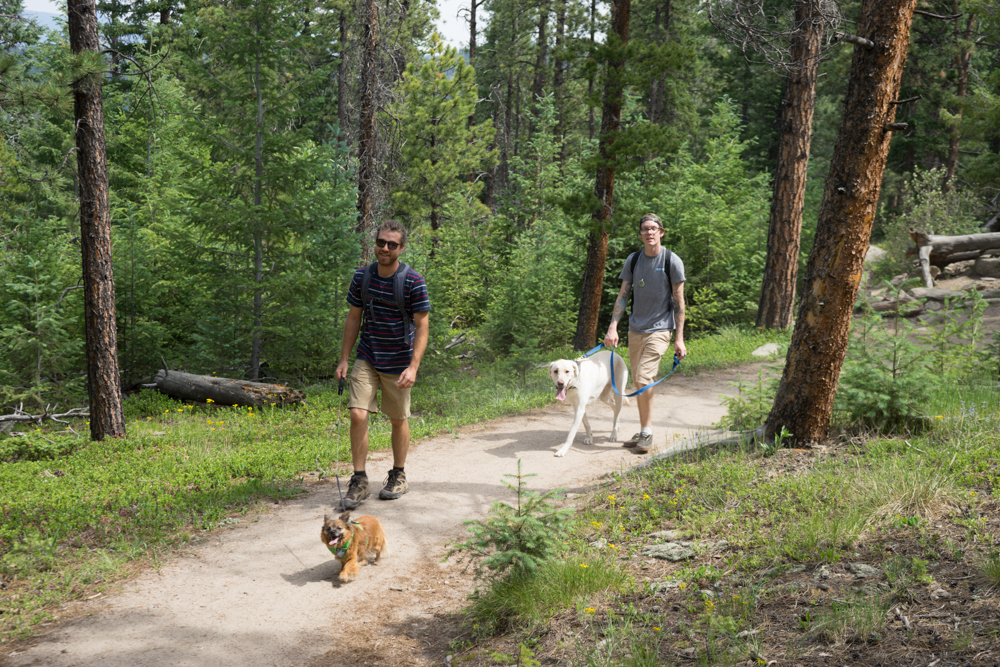 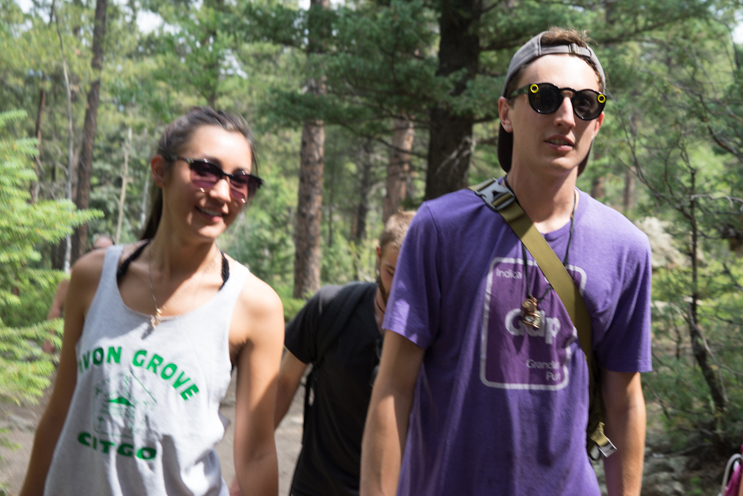 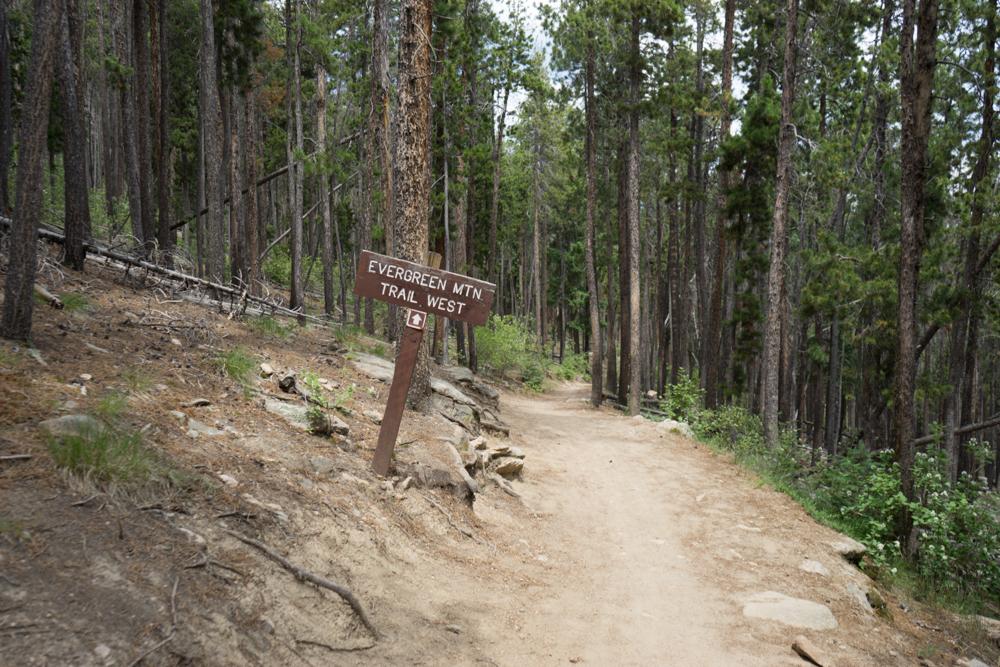 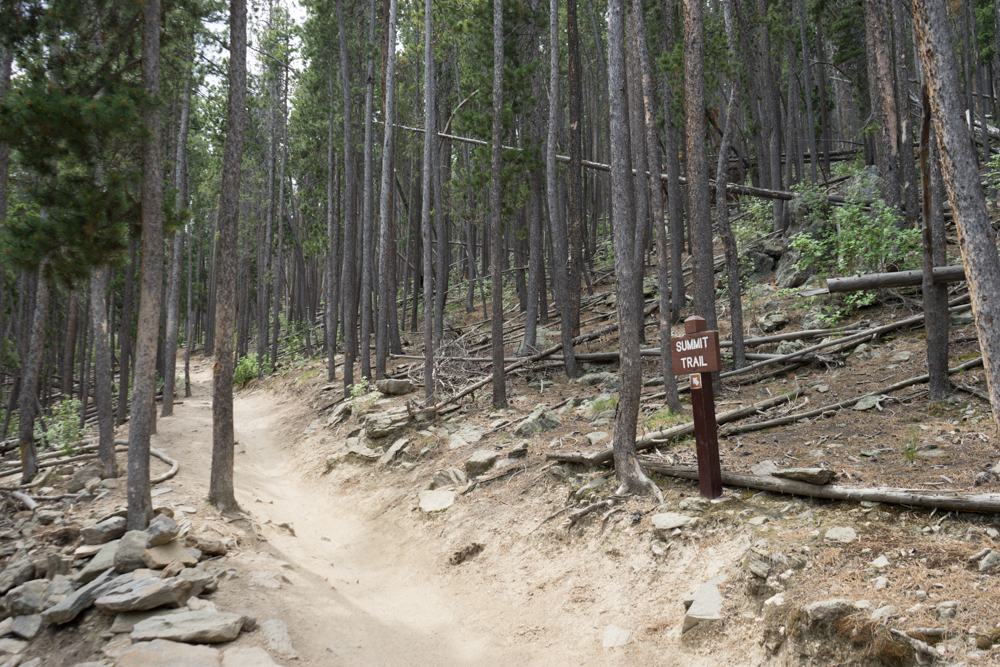 After the summit and the scenic overlooks, we gradually made our way down the remaining few miles and back to the trailhead. A couple people on the hike overheated and got a bit worn out, so we took a more gradual pace during the decline to ensure everyone made it safely and comfortably. Once everyone had finished the hike, the few that remained decided to head to Cactus Jack’s, a local bar and restaurant in Evergreen that supports CannaVenture. We enjoyed a few rounds and some well-earned lunch before hiking a bit more along Evergreen Lake and the dam that neighbors Cactus Jack’s. 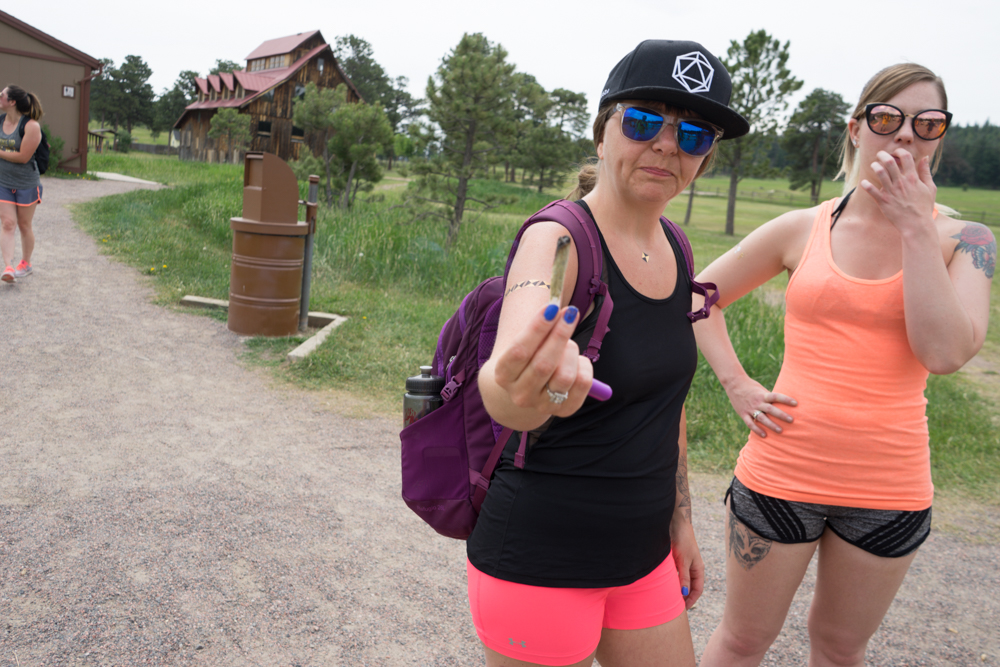 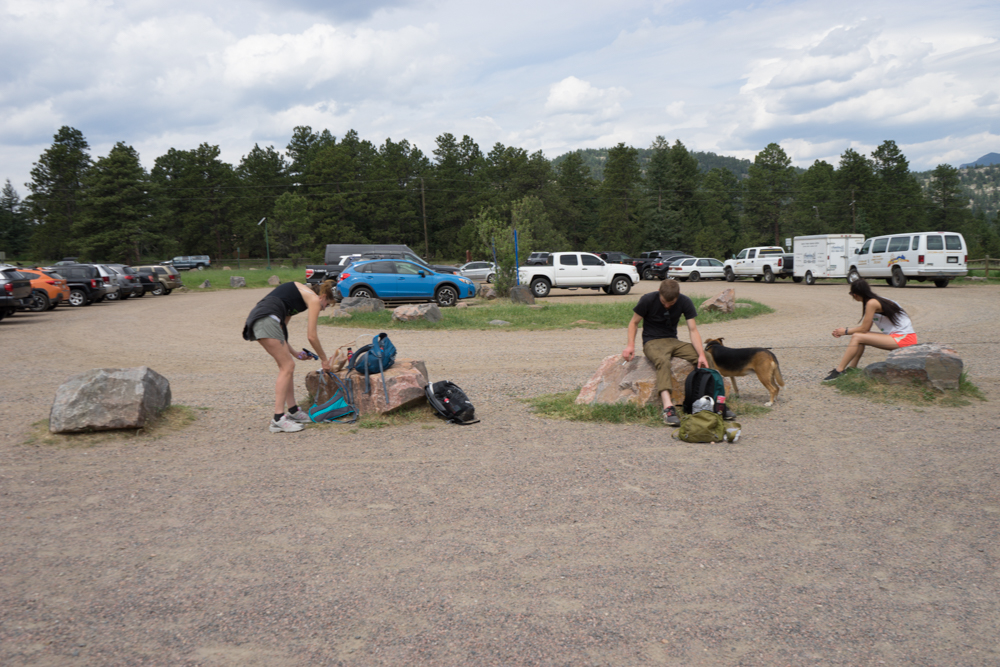 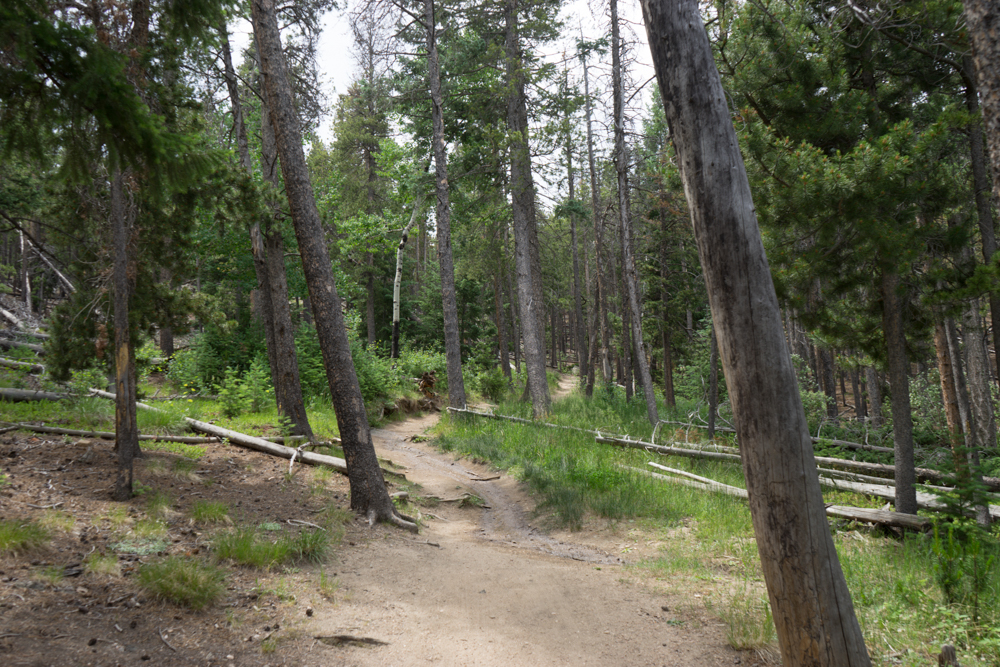 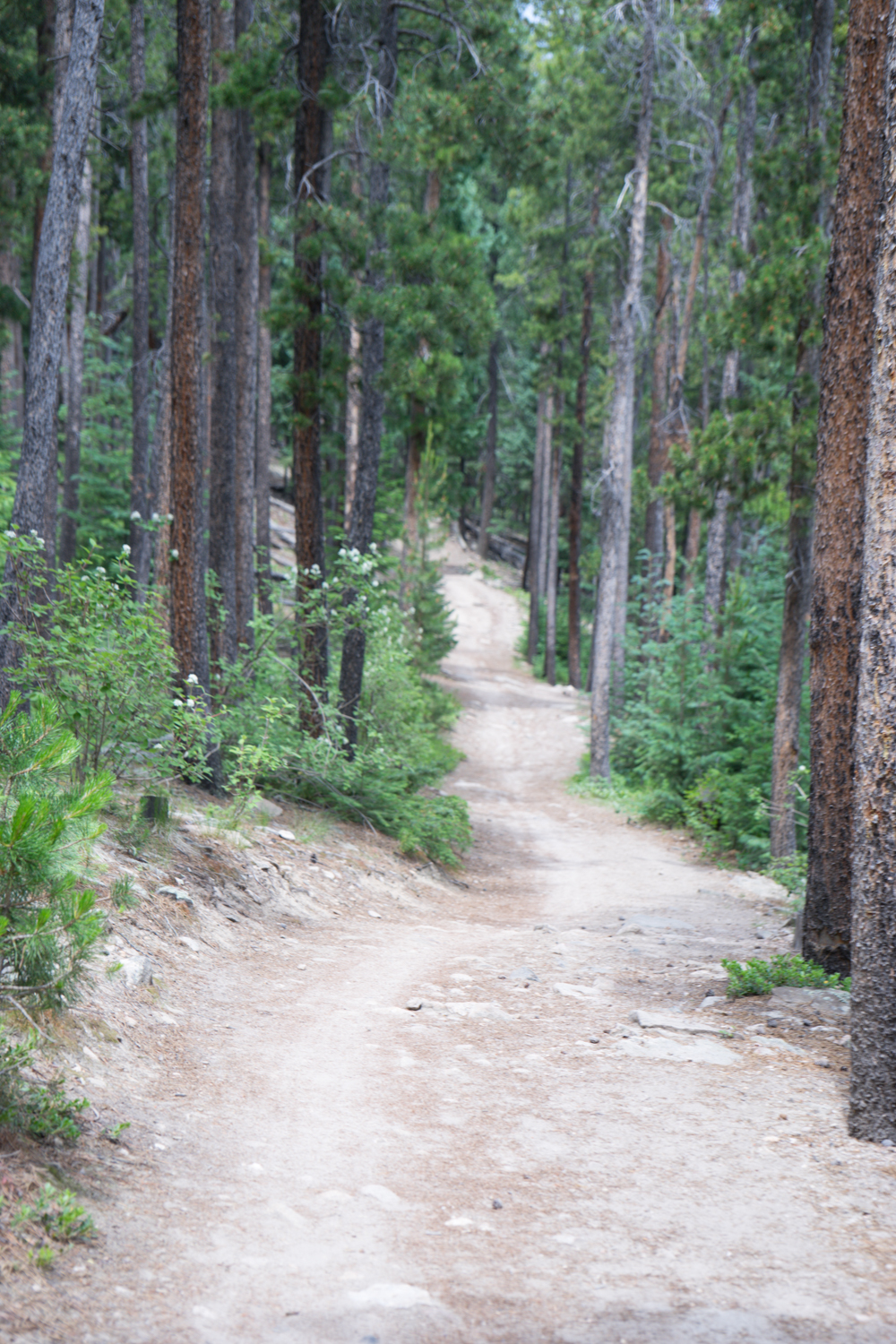 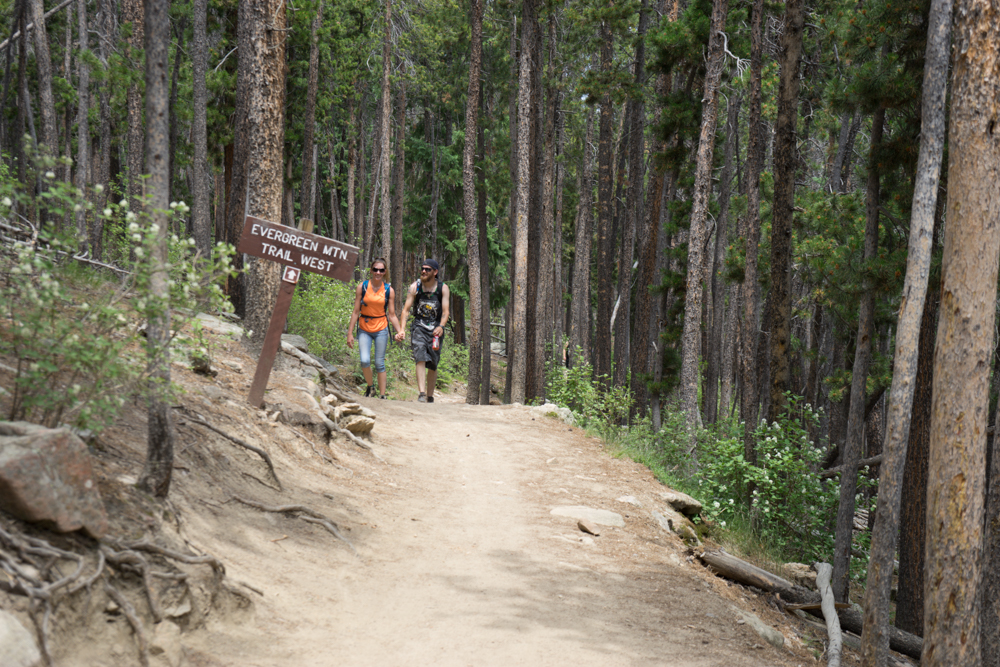 All things considered, the crew did an excellent job today. We had 20 brave souls that weren’t scared of some cloudy weather (and a small amount of rain that sprinkled on us at the top). No one had any issues obeying the fire ban. Everyone was able to put a solid 7+ miles under their belts and get outside to enjoy some of the natural beauty that Colorado offers.

Our next hike is on July 1st at Garden of the Gods and we would love to see more of you there. Head on over to the event page for more information.